The Town of St George, founded in 1612, is an outstanding example of the earliest English urban settlement in the New World. Its associated fortifications graphically illustrate the development of English military engineering from the 17th to the 20th century, being adapted to take account of the development of artillery over this period. 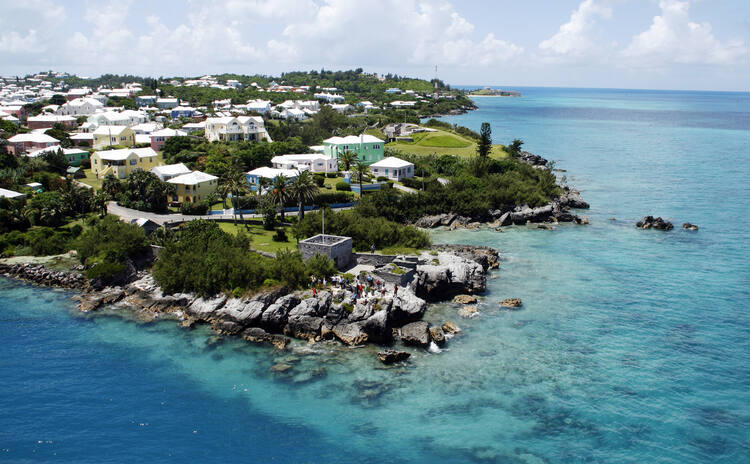 The Town of St George is of Outstanding Universal Value as an authentic and the earliest example of the English colonial town in the New World. Its associated fortifications graphically illustrate the development of English military engineering from the 17th to the 20th century, adapted to take into account the development of artillery over this period. Some of these are unique as surviving examples of the first defensive works built by early European colonists, few examples of which now remain intact. The later associated forts represent an excellent example of a continuum of British coastal fortifications.

The permanent settlement of St George began in August 1612. The inscribed area consists of the Town of St George on St George Island as well as fortifications on the Island and on a number of small islands commanding access to the Town and to the anchorage of Castle Harbour, at the eastern end of the Bermuda Islands in the North Atlantic. The layout of the Town is one that has grown organically over nearly four centuries. At its heart is King's Square (or Market Square), adjacent to the harbour, and providing the link between the harbour and the two main east-west roads that connect the Town with the rest of Bermuda: Water Street, giving access to the quays, and York Street to the north, the main street of the Town. The streets to the north provide a network of what began as narrow, winding lanes and alleys. The architecture of Bermuda is unique, and has changed little in its basic elements since the end of the 17th century. Different from other European-founded cities of the New World, St George has maintained the individually separated house for habitation, so typical of the English settlements in North America. Because of the nature of the soft limestone that continues to be used for construction, walls, including roofs, are white-washed. Buildings rarely exceed two storeys and many are only one storey in height. Since sources of water are scarce on the island, the white colour of the roofs and pitch are designed to collect rain water into cisterns through gutters and other conduits adding to the unique appearance of the Town.

St George was a garrison town from its earliest days, and military installations developed on the eastern side of the Town. The first of many barracks were built on Barrack Hill in 1780, and ancillary buildings, such as residences for senior officers, officers' messes, hospitals and a garrison chapel followed during the course of the 19th century. These were constructed in the standard British military style but using local materials. The related fortifications began in the early 17th century, with forts on Paget, Governor's, Charles, and Castle Islands. These were repeatedly reconstructed and strengthened during the course of the 17th and 18th centuries. At the end of the American Revolution, Britain made St George's Island its main New World naval base. The existing fortifications were radically redesigned and rebuilt in the 1780s and 1790s. Work began on the dockyard at the turn of the century, necessitating further drastic changes in the system of fortifications, with the construction of Forts George, Victoria, St Catherine, Albert, and Cunningham (on Paget Island). The advent of rifled artillery in the 1850s led to yet further modifications and strengthening of the fortifications.

Criterion (iv): The Historic Town of St George with its related fortifications is an outstanding example of a continuously occupied, fortified, colonial town dating from the early 17th century, and the oldest English town in the New World.

The inscribed property contains all the elements necessary to express its Outstanding Universal Value and is of adequate size to ensure the complete representation of the features which convey its significance.

To complete the continuum of fortifications in Bermuda, consideration should be given at a future date to adding the remaining fortifications to the list, especially the major fort at the Dockyard. The integrity is high but work is needed on the maintenance of some of the forts.

The town is of high authenticity, as are some of the fortifications, especially those built early in the 17th century. The Historic Town of St George is picturesque and distinct, typifying what is characteristic of Bermuda both in form and design and in its materials and substance. Today about 65% of the buildings in the town date from before 1900. Of these early structures, about 40% were built prior to 1800. Many of the significant buildings fall into this last category. St George is one of the few founding cities of a colony that has remained small, containing a high percentage of its early structures, while maintaining a continuity in its character, retaining its use and function to the present day.

Of the forts on the isolated islands, Southampton Fort, dating from 1621, stands unaltered for the most part, though a ruin. In comparable condition on Castle Island are the impressive remains of King’s Castle and the Devonshire Redoubt, built by 1621. Much of the early masonry construction of these forts remains, with only additional 18th century batteries added nearby. With the exception of the Landward Fort on Castle Island, dating from the later part of the 17th century, and the 1612 archaeological remains of Paget Fort, the other forts in the property are mostly 19th century and many are accessible to the public. It will be important to ensure that further forts are not adapted for re-use in ways which damage their authenticity, as has happened at Fort Victoria converted into a hotel recreation facility.

As a self-governing colony of the United Kingdom, Bermuda has enacted laws protecting historic and cultural properties throughout the islands. As early as 1950, the Bermuda legislature enacted legislation for the protection of buildings of “Special Interest” and in 1974 passed the Development and Planning Act, since revised, that called for the listing of buildings of “special architectural or historical interest” and for the appointment of “historic areas” in which controls were implemented for development. There are currently 176 listed buildings in the inscribed area.

Furthermore, the Bermuda National Parks Act 1986 was amended to include additional national parks and to offer more protection to the historic terrestrial environment by regulating activities, such as metal detecting and treasure seeking within historically designated areas.

Additionally, management plans are prepared for significant fortifications to provide detailed guidance and direction. As examples, a comprehensive design brief was completed for the restoration of the Martello Tower and a phased management plan for Fort St Catherine was developed in 2009. These were followed by major restorations, which included restoration of Seawalls, roof and window restorations, the restoration of the artillery collection, new exhibits including the Carronade Room, Artillery Exhibit, Magazine Exhibits and Victorian Soldier Room. Management plans are developed for Castle Island and Southampton Island as they are vulnerable to storm damage and invasive plant species.

In order to oversee and effectively manage the World Heritage property and related fortifications, the World Heritage Property Committee was formed in 2000, which is made up of a selection of technical officers from various Governmental departments and representatives from the Corporation of St George’s, the Bermuda National Trust, the St George’s Foundation and other such relevant organisations. During its monthly meetings, the World Heritage Property Committee reviews a standard order of business and addresses various matters. Given the multitude of stakeholders involved, the Bermuda Government appointed a Heritage Officer since 2005 to provide the necessary coordination. Further, this officer is mandated to ensure that the Management Plan is implemented and specific projects are on track.

The care and conservation of the forts is currently undertaken by the Government Parks Department and the Department of Conservation Services, which includes the enhancement and upgrading of a number of fortifications located within the World Heritage property. Forts which have recently undergone restoration works include the Martello Tower in Ferry Reach, St David’s Battery, Fort George, Alexandra Battery, and Fort St Catherine as well as Fort Scaur (located outside of the property). These works range from structural repairs, interpretive signage, development of exhibits, restoration of cannons, culling of invasive vegetation, graffiti removal to general site improvements. Additional maintenance measures involve the review of fortifications after every major storm event to ensure that the structural integrity of the forts remains intact.