Launch of the Portal to the Heritage of Astronomy 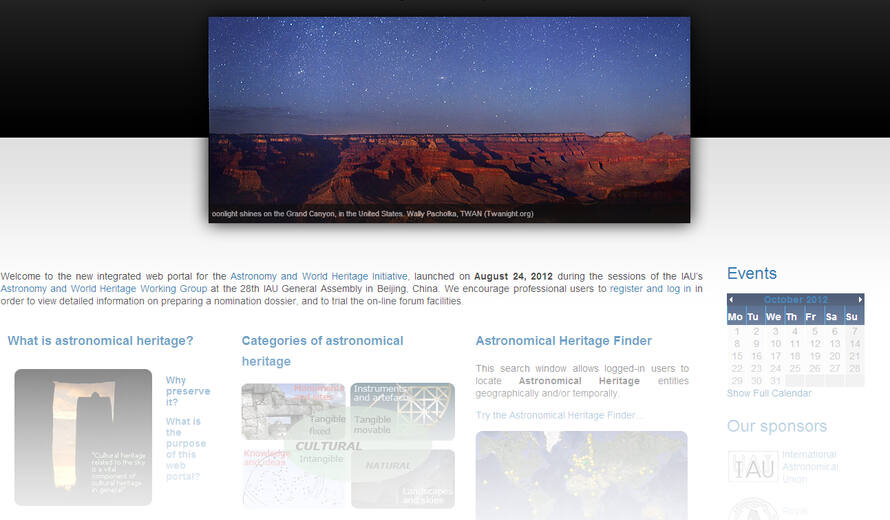 A new UNESCO–IAU online Portal to the Heritage of Astronomy has been launched today at the IAU’s 28th General Assembly in Beijing, China. The site, which resides at www.astronomicalheritage.net, is a dynamic, publicly accessible database, discussion forum and document repository on astronomical heritage sites throughout the world, even if they are not on UNESCO’s World Heritage List.

Buildings and monuments relating to astronomy throughout the ages stand as a tribute to the diverse and often complex ways in which people have rationalised the cosmos and framed their actions in accordance with their understanding of it. This includes, but is by no means restricted to, the development of modern science. The importance of the sky in human heritage was recognised by UNESCO when it established its Astronomy and World Heritage Initiative in 2003, and in 2008 it signed a Memorandum of Understanding with the IAU (seewww.astronomy2009.org/news/pressreleases/detail/iya0803/). Since then, the two organisations have been working together to promote astronomical sites of potential “Outstanding Universal Value”.

The online portal is the latest and potentially most significant deliverable from the accord set up between UNESCO and the IAU four years ago, and results directly from a collaboration between the IAU’s Astronomy and World Heritage Working Group (AWHWG) and the Ancient Skies Project (www.ancient-skies.org) set up through the IYA2009 Astronomy and World Heritage Cornerstone Project. Professor Clive Ruggles, Emeritus Professor of Archaeoastronomy at the University of Leicester, UK, is Chair of the AWHWG. He said: “A lot of our most precious astronomical heritage — both ancient and modern — is under threat. If we don’t act to try to protect and preserve it, we run the risk of losing it. Over the coming months and years this web portal will become ‘the’ vehicle for actively supporting, as well as sustaining, political and public interest in the promotion and protection of astronomical heritage sites, both cultural and natural.”

A previous AWHWG milestone was the Thematic Study on Astronomical Heritage produced in 2010 by the IAU, working together with ICOMOS, UNESCO’s advisory body for cultural sites. Endorsed by UNESCO’s World Heritage Committee in 2010, the Thematic Study provides guidelines for UNESCO member states on the inscription of astronomical properties. Much of its content has been incorporated onto the portal.

The portal will not only feature sites and monuments, but also other types of astronomical heritage such as portable instruments and intangible cultural practices, as well as dark-sky places.

The database is dynamic, continually subject to update by peer review. For example, members of the AWHWG have been working over the past year to develop nine much more detailed Extended Case Studies which will be brought online after they have been discussed and approved at the IAU General Assembly. Several of them, it is hoped, will be a direct help in stimulating new World Heritage List nominations.

The portal was designed in such a way that both beginners and experts can benefit from its content. This is an important step in the process of raising awareness of the importance of protecting astronomical heritage sites at all levels.

Over the coming weeks two-way links will be established between information on the World Heritage Centre’s own website (whc.unesco.org) and the new portal. As Ruggles says: “The portal is not only aimed at the public, but also at UNESCO National Commissions seeking to nominate astronomical heritage sites for inscription onto the World Heritage List. It will provide guidance and comparative material. Scientific heritage is not just important in itself, but often relates to sustainability, landscape conservation, tourism and even biodiversity.”

The IAU is an international astronomical organisation of about 10 000 professional astronomers from 90 countries. Its mission is to promote and safeguard the science of astronomy in all its aspects through international cooperation. The IAU also serves as the internationally recognised authority for assigning designations to celestial bodies and surface features on them.

Add to your calendar (ics)
Activities (1)