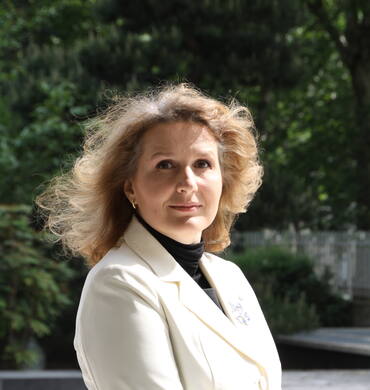 Anna Sidorenko is in charge, as a Programme Specialist, of the implementation of the World Heritage Convention in Eastern and South-Eastern Europe.

Since 2005, she is also responsible for the implementation, in collaboration with the International Astronomical Union, of the Thematic Initiative “Astronomy and World Heritage”.

Anna Sidorenko, France Alumna (French Government Fellow, 1993/1994), holds a PhD in Human Sciences and New Humanities (CNAM, Paris), a diploma of specialization in Conservation of Historical Monuments from the Center of the High Studies of Chaillot (Ecole de Chaillot - CEDHEC, Paris), a diploma of specialization in Urban Planning from the European Institute of Architecture and Planning (Institut européen d'aménagement et d'architecture – INEAA, Rouen) and received a certification in international negotiations from the National School of Administration (Ecole Nationale d’Administration - ENA, Paris).

Anna Sidorenko is the first woman from the Republic of Uzbekistan to have joined the UNESCO Secretariat.