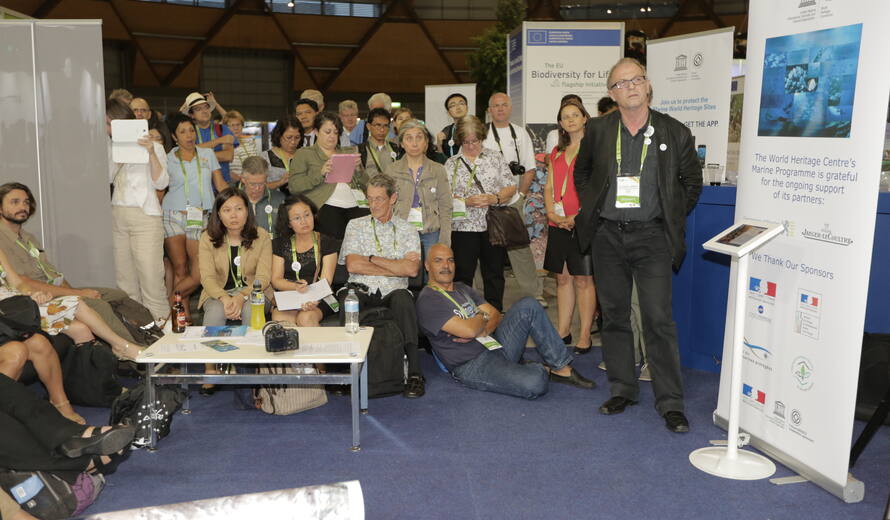 The special evening event started with a performance of the Aboriginal group WUBA which just signed a partnership agreement with the Great Barrier Reef park authority to jointly manage their sea country. Keynote speeches were provided by Dan Basta (Director of NOAA’s Office of National Marine Sanctuaries), Christophe Lefèvre (Head of international and European affairs at the French Marine Protected Areas Agency, AAMP), and Arturo Izurieta (Director of the Galapagos National Park). Dan Basta was the first host of our marine World Heritage site managers community when we convened in Papahanaumokuakea (USA) while the AAMP provided us an unforgettable second congress in Scandola, France last year.

Almost 20 World Heritage marine site managers participated in the event. As the frontrunners in ocean conservation globally, they collectively showed the international conservation community how these exceptional sites have plenty of good practices that can be useful for other protected areas all over the world. The audience was also reminded that being a World Heritage site does not mean immunity to threats or management challenges.

The special evening event was made possible thanks to the ongoing support of Jaeger-LeCoultre and the Government of Flanders. This initiative also received support from the French Marine Protected Areas Agency (AAMP) and the French Ministry for Environment, Sustainable Development and Energy in the framework of the France-UNESCO cooperation agreement.