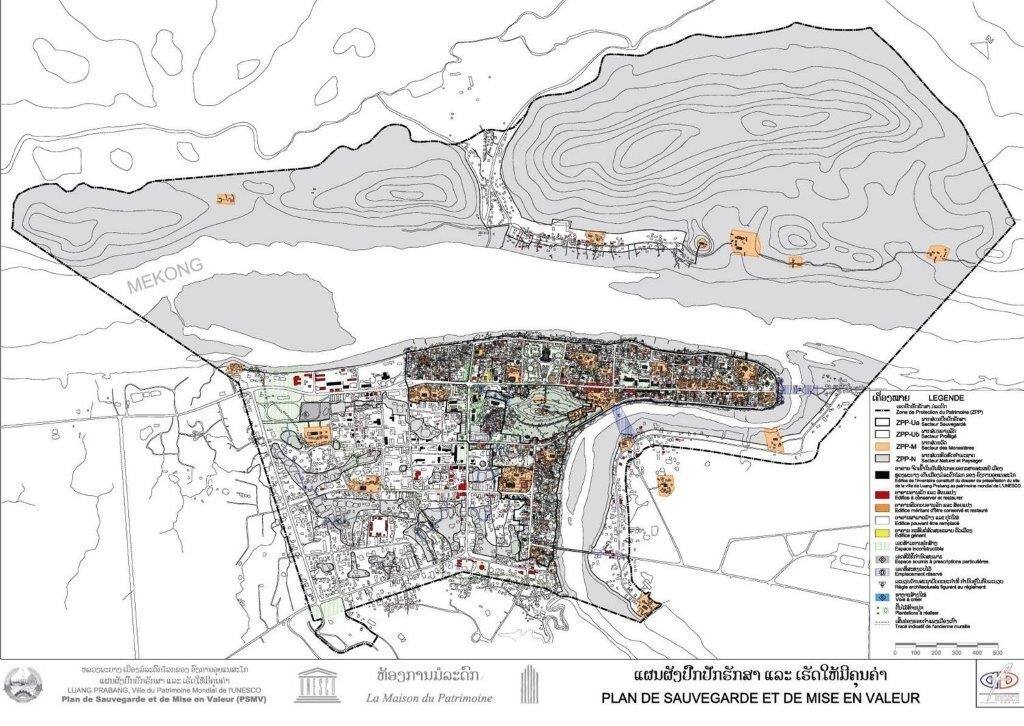 The technical cooperation for the protection, enhancement and development of the Town of Luang Prabang, Lao People's Democratic Republic, is a remarkable example of tripartite cooperation between the Lao People's Democratic Republic, France and the UNESCO World Heritage Centre. It is the flagship pilot project of the France-UNESCO Cooperation Agreement, which served as a launch pad for the development of the Framework Cooperation Agreement between France and UNESCO. It was an exemplary operation, which allowed to test operational methods, forms of partnership and innovative cooperation. This cooperation took a city to city approach, based on sharing resources and coordination between bilateral and multilateral aid.

The Town of Luang Prabang was inscribed on the World Heritage List in December 1995. Located in the mountainous north of Laos, at the confluence of the river Mekong and the river Khan, Luang Prabang is the former royal capital of one of the kingdoms of Laos. The Outstanding Universal Value of the property is due to the close link between the built and natural environment, as well as the juxtaposition of a Laotian urban framework - vernacular architecture in wood - and a grid plan typical of the urbanism of the colonial era.

20 years after its inscription, the enhancement, protection and development of the Town of Luang Prabang can be considered as a remarkable example of integrated planning, based on local development support by cultural and heritage values. At a time when the debates of the international community are considering how to use culture as a lever for development, for the climate or even for housing, it is interesting to highlight the experience of 20 years of cooperation, and learn lessons from it, both for theory and practice.

A programme to protect and develop the site was established in 1996, with the support of the City of Chinon and the Région Centre (France), as part of a decentralised cooperation framework. Supported by several partners (leading partners include the French Ministry of Culture, the then French Ministry of Infrastructure and the Ministry of Foreign Affairs, as part of the France-UNESCO Cooperation Agreement, as well as the Agence française de développement (AFD) and the European Union), this programme to conserve and protect monumental, urban, architectural and landscape heritage enabled the creation of an entity to manage the world heritage site, the Heritage House, the training of an operational Laotian team for monitoring and conservation and actions for urban renovation and restoration (roads, planning, building restoration, both monumental and vernacular, sanitation, and restoration of wetlands) as well as the implementation of a plan for the protection and enhancement of the historic town.

The development of tourism in the city since its inscription, as well as strong economic and demographic growth, has encouraged work on a wider scale than the site itself, addressing social, economic and environmental issues as well as the wider landscape, in order to support development. In order to relieve pressure on the historic heart of the site and to support balanced development of the site and the surrounding region, two additional steps were taken. First of all, measures for urban development planning and landscaping of the location at suburban level, taking both the riverine and agricultural landscape into account: defining a planning document inspired by the French provision, the Schéma de Cohérence Territoriale (Territorial Consistency Scheme - SCOT), considering the uses and roles of the city; secondly, measures to preserve the natural environment and human habitat and to support the development of rural areas (at the scale of the wider landscape and the Nam Khan catchment): the Nam Khan eco-valley project.

The support for the conservation and development of the Town of Luang Prabang, assisted by the France-UNESCO Cooperation Agreement from the outset, and created specifically to mobilise different types of expertise and cooperation, provides a reference point in terms of methodology (urban renovation of a historic city inscribed on the World Heritage List) and the cooperation model (multilateral and bilateral cooperation bringing together UNESCO, several French Ministries, local authorities and funders, universities and schools).

The unique nature of the technical cooperation carried out at Luang Prabang and its success were due to the requirement for excellence called upon by the 1972 World Heritage Convention, and its success in establishing three virtuous features from the start: a regulatory framework covering every level, from the wider scale to the local landscape and the small plot, with governance at local, regional and national level; the long-term in situ training of an operational team; and the implementation of wide-reaching operations for the restoration of monuments, the built environment, the infrastructure and the enhancement of the landscape. It is also worth noting the importance of implementing detailed planning tools, carried out on the ground with local teams, which allowed both to save time and resources by avoiding having to go through international consultancy firms with very little knowledge of heritage issues, and to adjust the recommendations for protection and enhancement on the ground. The regulatory framework and the skills implemented also allowed the creation of favourable ground for developing the project design, as well as mobilising aid and development funding sources, which at that time were rarely focused on the enhancement of heritage, such as for example the Asia Urbs programme of the European Union.

The task of conservation and enhancement of the Town of Luang Prabang was part of a process of management of change based on spatial planning and territorial development to enhance the cultural, environmental and social resources of the site as much as possible. The Town of Luang Prabang project took place before the approach to historical urban landscape was highlighted in the UNESCO Recommendation approved in 2011 and can be considered as an upstream experience. The Town of Luang Prabang has undergone profound changes since its inscription. Well beyond the work of restoration, a new city has been created around a shared notion of the features that make it valuable: its use value and heritage value are unavoidably linked. The challenge is to preserve the Outstanding Universal Value and the authenticity and integrity of the attributes that carry the value and avoid falling into the trap of inventing a historical reference considered to be the pseudo original state. The city has developed through a series of exchanges between cultures and communities. The work of urban restoration undertaken is part of that process of change. The value of the framework defined by the authorities and proposed by the experts can only be understood in the way the current inhabitants make it their own and share its principals. It is in this sense that the conservation, enhancement and management of the Town of Luang Prabang can be considered to be a success.