State of Conservation Bam and its Cultural ... 2011
Print

a) Lack of a comprehensive management plan;

b) The boundaries of the property inscribed on an emergency basis were not aligned with the written text of the original Nomination File;

The State Party submitted a report on the state of conservation of the property on 31 January 2011. The report includes general information to substantiate the Statement of Outstanding Universal Value for the property. The reactive monitoring mission to the property, requested by the World Heritage Committee at its 34th session (Brasilia, 2010) was not carried out due to unexpected last minute commitments by the State Party.

As for the actions implemented at the property in furtherance to the identified corrective measures, the State Party reports the following:

a) Management Plan and other planning tools

The Comprehensive Management Plan was adopted in 2010 by the Higher Council for Architecture and Urban development, as an annex to the Special Structural Master Plan of Bam. The comprehensive plan for the conservation of Bam Citadel was also updated and now includes precise actions for every sector of the Citadel, and has already been used to guide conservation actions throughout 2010. In addition, the comprehensive archaeological plan of the property, as well as the plan for the definition of it’s boundaries have been finalised. The report indicates that the plan for promotion and for tourism improvement has yet to be completed. To support the communication of results, professional seminars as well as Steering Committee meetings have taken place, with pending meetings with the Ministry of Housing to control construction works in Bam. The adoption of rules and regulations for Bam and its Cultural Landscape is still reported as pending. No precise timeframe has been provided for the expected completion of work.

b) Management arrangements and resources

The Safeguarding Unit and the Cultural Heritage Office (ICHHTO) have been established and are now staffed and resourced to ensure full operation, including the monitoring of sites throughout the property and the buffer zone. Migration from rural areas into the city has led to the increase in land price around the area and can constitute a threat to the existence of city gardens. ICHHTO has controlled this within the limits of the city and continues to supervise the surrounding areas prior to issuing permits.

Materials and equipment have been acquired but the State Party indicates that there is still a need to receive support to procure equipment for conservation interventions.

As for human resources, capacity building efforts, including training on interventions and archaeological works, have also continued to ensure the conservation of traditional know-how and therefore the long-term maintenance of the property.

c) Conservation of the property

Work has continued on the removal of debris, emergency stabilization and restoration of zones, focusing largely on the recovery of space for public use. These works have been fully documented and a unified monitoring system has been established to ensure compliance with developed standards for conservation. Research has also been carried out on water resources, urban plan development, documentation and preservation of archaeological findings.

The World Heritage Centre and the Advisory Bodies note with satisfaction the sustained implementation of the corrective measures identified for the property and the progress made in the recovery of the historic area. They wish to underscore the importance of fully coordinating with the Ministry of Housing to ensure that construction works at Bam do not affect the attributes of the property and to control development in the surrounding areas, so that the landscape which supports the Outstanding Universal Value of the property is fully protected.

Bam and its Cultural Landscape (Islamic Republic of Iran) (C 1208)

7. Decides to retain Bam and its Cultural Landscape (Islamic Republic of Iran) on the List of World Heritage in Danger.

Establishment of the World Heritage List in Danger (Retained Properties)

7. Decides to retain Bam and its Cultural Landscape (Islamic Republic of Iran) on the List of World Heritage in Danger. 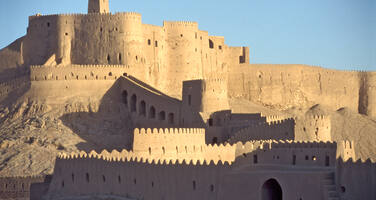