Following the fire which occurred on 29 December 2001, a meeting was organized, in July 2002, by the UNESCO Lima Office on the rehabilitation of the Historic Centre. The meeting included national and local institutions, university experts as well as representatives of the private sector. It recommended a revision of the Management Plan and a more balanced distribution of housing and commerce, as well as greater social participation in the decision and financing process. Follow up to this meeting was given at the level of the private sector but not at the level of the Municipality, which changed. In addition, an ICOMOS monitoring mission took place from 31 March to 7 April 2003 to evaluate the impact of the new housing project in the Historic Centre. The mission report is being finalized.

The purpose of the ICOMOS monitoring mission was to evaluate the new housing project in the Historic Centre. The area referred to as Mesa Redonda, damaged by the fire on 29 December 2001, is within the boundaries of the historic centre, which is protected by the State Party's legislation, but outside the World Heritage boundary. This very high density zone includes twelve buildings declared as historic monuments. The recommendations of the meeting held in Lima in July 2002 have not been followed nor was a follow-up given to an IDB project proposal. It seems that no damage has been sustained in the zone inscribed on the World Heritage List. However, other serious problems were detected in the historic centre, which will be detailed in the forthcoming report and which can be summarized as follows: about 300 buildings in danger; a high percentage of the higher part of the buildings in the historic centre are abandoned; the Dirección General de Patrimonio Monumental e Histórico does not have the adequate minimum resources to protect the historic centre; the lack of security is alarming; the lack of proper management of the site.

1. Takes note of the additional information provided by ICOMOS;

2. Strongly urges the State Party to take into consideration the recommendations made by the July 2002 meeting on the rehabilitation of the Historic Centre of Lima;

3. Urges the State Party to revise its management plan for the Historic Centre;

1. Takes note of the additional information provided by ICOMOS,

2.  Strongly urges the State Party to take into consideration the recommendations made by the July 2002 meeting on the rehabilitation of the Historic Centre of Lima

3. Urges the State Party to revise its Management Plan for the Historic Centre,

4. Requests the State Party to submit, by 1 February 2004, for review at its 28th session, a detailed report on the revision and implementation of the Management Plan of the site. 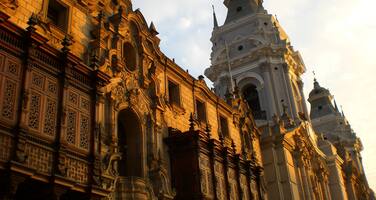