Paris, Banks of the Seine
(France)

On 29 November 2019, in response to World Heritage Committee decision 43 COM 7B.82, the State Party submitted a report on the state of conservation of Notre-Dame de Paris Cathedral, available at https://whc.unesco.org/en/list/600/documents/.  On 29 January 2021, the State Party submitted an update to this report. The progress made is presented in these reports, as follows:

In addition, the State Party is making efforts to reconcile the urgency of interventions and the health protection of workers, in particular against the risk of lead contamination. The State Party also emphasizes the strong involvement of the community of researchers who regard the rubble as samples bearing important information on the history of the construction of Notre-Dame, the methods and materials used.

According to reports submitted by the State Party, the phase of ensuring the security of Notre-Dame Cathedral is still underway despite the emergency measures and works carried out. Significant work remains to be done to avert the risk of the collapse of the building. This first securisation-consolidation phase should be completed in summer 2021. It is important that this phase be carried out with the greatest possible care in order to conserve as much of the damaged materials and fragments as possible to ensure that future conservation interventions are not predetermined in this emergency phase. It is only after this phase that the restoration phase of the damaged elements will begin.

The World Heritage Centre, ICCROM and ICOMOS have taken note of the measures taken by the State Party to prepare for the next phase of restoration and establish optimal conditions for the conservation and restoration of the building, in particular the creation by the 29 July 2019 decree of a public establishment responsible for the conservation and restoration of the cathedral, placed under the supervision of the Ministry of Culture, and which also takes into account the health and safety of workers.

The strong involvement of the research community in the analysis of the rubble and remains of the disaster for the purpose of understanding the history of the cathedral, its construction methods during successive construction sites and its architecture is also noted with satisfaction.

The World Heritage Centre, ICCROM and ICOMOS have taken note of the proposed restoration approach, consisting in restoring the architecture of Viollet-le-Duc, in particular with regard to the roof and the spire. In order to allow the restoration work to be carried out by the State Party to comply with the recommendations of the World Heritage Convention, it is recommended that the Committee reminds the State Party of the need to inform the World Heritage Centre and the Advisory Bodies of the methodology it proposes for the restoration of the building, as well as the system to monitor the structural stability of the cathedral, and the preventive measures and actions to avoid future fire risks, in accordance with the paragraph 172 of the Operational Guidelines.

To facilitate this process, it is recommended that the Committee invite the State Party to strengthen the current coordination with UNESCO, ICOMOS and ICCROM, which will appoint three experts to assist the State Party, and to engage in regular and enhanced dialogue with the World Heritage Centre and the Advisory Bodies. This would promote a clearer understanding of the different restoration options that are being discussed or considered for parts of the building. It is also recommended that the Committee encourage the State Party to invite an Advisory mission as soon as circumstances permit, and in the meantime to submit exhaustive graphic and photographic documentation of the interventions already carried out and in progress documenting all the stages of these interventions, before, during and after the work.

The Committee could also request the State Party to submit a detailed progress report by 1 February 2022 which would present the assessment of the processes undertaken to date, the challenges in terms of restoration that need to be addressed, and the methodology that is being considered. 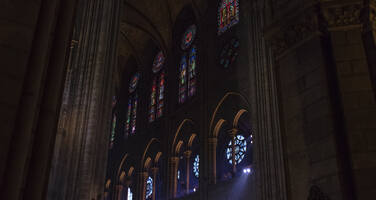