A joint World Heritage Centre/IUCN Reactive Monitoring mission visited the property from 10 to 18 August 2017. On 1 February 2018, the State Party submitted a state of conservation report for the property, which is available together with the mission report at http://whc.unesco.org/en/list/1023/documents and reports the following:

On 20 February 2018, the World Heritage Centre requested additional clarifications concerning garbage removal, hydrocarbon exploration and exploitation licenses, and military facilities and activities, but had not received a response at the time of writing of this report.

The 2017 mission assessed the property’s state of conservation to evaluate whether criteria for its inscription on the List of World Heritage in Danger were met.

While there is currently no hydrocarbon exploitation planned near the property and it is prohibited by law within the property’s boundaries and its protective zone, it is noted with serious concern that Article 2 of Order No. 103-p, dated 31 January 2013, still provides the right to use the licensed subsoil plots of Yuzhno-Chukotski, Severo-Vrangelski-1 and -2, for exploration and hydrocarbon exploitation. Two of the three licenses intersect with the 36 nautical miles protective zone of Wrangel Island Strict Nature Reserve, coming as close as 12 nautical miles to the marine boundary of the property. While the State Party report notes that seismic prospecting currently underway would not affect the marine part of the property, it is not clear on what basis such a conclusion was made. The mission concluded that hydrocarbon exploitation in the waters near the property could represent a potential danger to its OUV. It is therefore recommended that the Committee request the State Party to suspend these activities, and to urgently undertake an EIA, meeting highest international standards, including a rigorous assessment of the impacts on the OUV of the property, in line with IUCN’s Advice Note on Environmental Assessment before any hydrocarbon drilling activities are undertaken;

The mission was informed that negative impacts of recently constructed military facilities within the property would remain limited and could include some potentially positive side effects. However, the mission was not provided with any information, which would allow assessing the impacts of the military facilities and related activities on the OUV of the property. Hence, it is recommended that the Committee regret that the State Party has not provided this information despite repeated requests by the Committee, and that it request the State Party to urgently provide more detailed information on current and potential impacts, to immediately halt any activity that may negatively affect the OUV of the property, and to implement appropriate measures to avoid and minimize impacts, and to mitigate any residual impacts.

The mission further concluded that the property’s inscription on the List of World Heritage in Danger, while not recommended at this stage, could be justified in the case of: 1) absence of proof that the military presence within the boundaries of the property does not constitute an ascertained danger to its OUV; or in the case that 2) hydrocarbon exploitation is pursued without prior EIA in line with International Finance Corporation (IFC) 2012 performance standards and a rigorous assessment of the impacts on the property, in line with IUCN’s World Heritage Advice Note on Environmental Assessment.

The continued efforts to remove garbage from the island under difficult environmental conditions are welcome. The mission noted the intention to completely remove garbage within approximately five years. However, it is of concern that only 1,000 tons of scrap metal are planned to be removed over the period of 2017 and 2018, whereas 1,200 tons of metal garbage were removed in 2016 only. In order to attain the five-year target, efforts will need to be stepped up significantly considering that the property’s 2013-2017 Management Plan counted 25,000 tons of scrap metal and 100,000 metal drums. It is regrettable that 13 years after inscription of the property, fuel drums remain dispersed across the island, particularly in riverbeds, and significant concentrations of garbage still exist around former settlements. It is recommended that the Committee request the State Party to provide a clear timetable for the clean-up of garbage and associated contaminants in order to guarantee its targeted completion within five years and to report on the planning and implementation of these activities.

The accommodation of a limited number of visitors in new removable huts is not currently cause for concern, as long as visitation remains within sustainable limits.

Overall, the mission observed a trend towards increasing human activity on the Wrangel Island and in the wider region, including maritime traffic, exerting increasing pressure on fragile arctic ecosystems. This increased pressure coincides with additional stress on the ecosystem resulting from climate change. The mission therefore recommended identifying the ecological carrying capacity of the property through a study on the terrestrial and marine components of the property.

or in the case that
b) hydrocarbon exploitation is pursued without prior EIA in line with International Finance Corporation (IFC) 2012 performance standards and a rigorous assessment of the impacts on the property, in line with IUCN’s World Heritage Advice Note on Environmental Assessment; 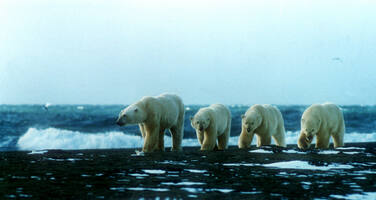