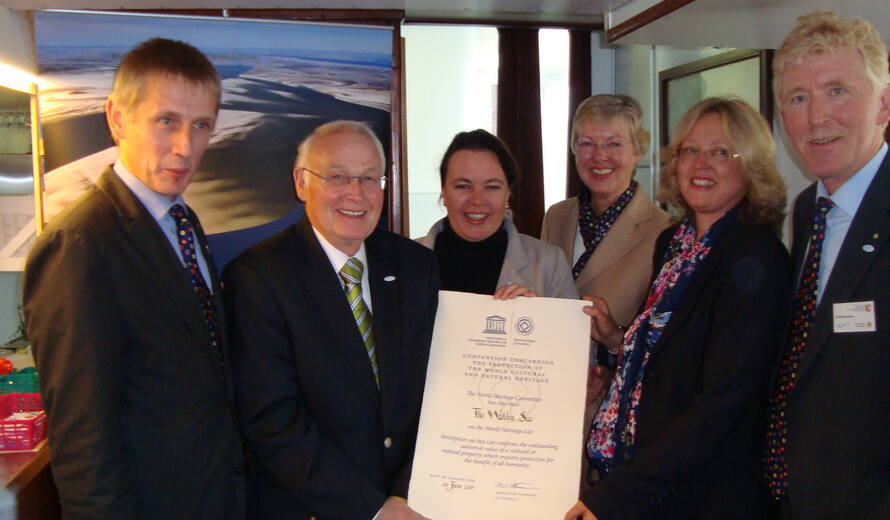 The German Minister of the Environment Hans-Heinrich Sander (Lower Saxony) and the Minister of Fishery Dr Juliane Rumpf (Schleswig-Holstein) received the UNESCO certificate for the transboundary World Heritage site of the Wadden Sea during the inscription ceremony on 2 October 2010 on a boat off the town of Büsum in the Schleswig-Holstein Wadden Sea National Park. While the World Heritage site is in Germany and the Netherlands, the ceremony was held to recognize the inscription of the German part of the site.

In her address at the ceremony, Dr Mechtild Rössler, Chief of the Europe and North America Section, congratulated the two States Parties of Germany and the Netherlands for the spirit of exemplary collaboration. She further highlighted the role of the Wadden Sea for the conservation of species migrating along the African Eurasian Flyways and expressed the hope for the property to be extended by the Wadden Sea area within Denmark.

The Parliamentary Under-Secretary of State of the Federal Ministry for the Environment, Nature Conservation and Nuclear Safety Ursula Heinen-Esser and the Executive Secretary of the Common Wadden Sea Secretariat Jens Enemark also attended the ceremony.

The inscription ceremony for the Dutch part of the Wadden Sea took place in May 2010 in the presence of the Deputy Director of the World Heritage Centre Kishore Rao.