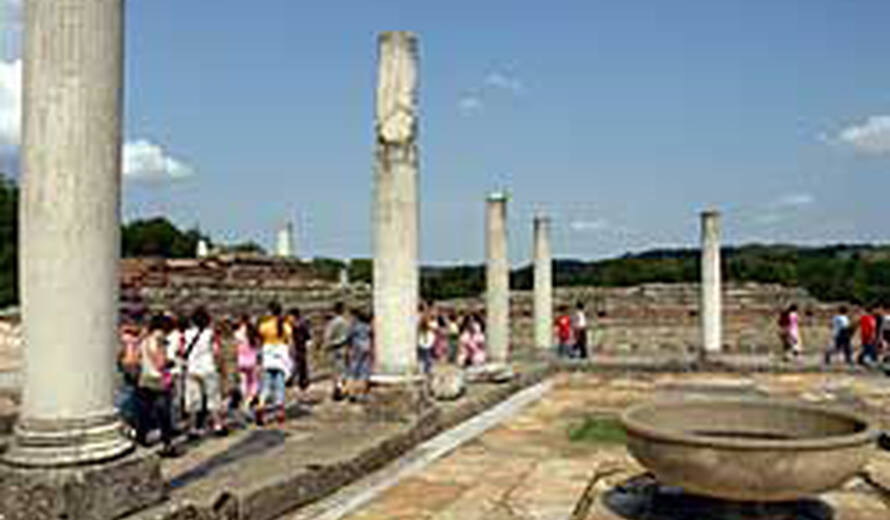 The Late Roman fortified palace compound and memorial complex of Gamzigrad-Romuliana, Palace of Galerius, in the east of Serbia, was commissioned by Emperor Caius Valerius Galerius Maximianus, in the late 3rd and early 4th century. It was known as Felix Romuliana, named after the Emperor's mother. The site consists of fortifications, the palace in the north-western part of the complex, basilicas, temples, hot baths, memorial complex, and a tetrapylon. The site offers a unique testimony of the Roman building tradition marked by the ideology of the period of the Second Tetrachy. The group of buildings is also unique in its intertwining of ceremonial and memorial functions. The relation between two spatial ensembles in this site is stressed by the tetrapylon which is placed on the crossroads between the worldly fortification and palace on the one side and the other-worldly mausoleums and consecration monuments on the other.

Gobustan Rock Art Cultural Landscape covers three areas of a plateau of rocky boulders rising out of the semi-desert of central Azerbaijan, with an outstanding collection of some 6,000 rock engravings bearing testimony to 4000 years of rock art. The site also features the remains of settlements and burials, all reflecting an intensive human settlement by dwellers who lived in the area during the wet period that followed the last ice age, from the Upper Palaeolithic to the Middle Ages. The property cover an area of 537 ha., and is part of the larger protected Gobustan Reservation.

The ensemble of buildings, sports facilities and open spaces of the Central University City Campus of the Universidad Nacional Autónoma de México (UNAM), was built from 1949 to 1952 by more than 60 architects, engineers and artists who were involved in the project. As a result, the campus constitutes a unique example of 20th-century modernism integrating urbanism, architecture, engineering, landscape design and fine arts with references to local traditions, especially to Mexico's pre-Hispanic past. The ensemble embodies social and cultural values of universal significance. Universally recognized, the campus is one of the most significant icons of modernity in Latin America. It is also one of a very small number of projects anywhere in the world where the principles proposed by the modern movements in architecture and town planning, the ultimate purpose of which was to improve people's quality of life, were thoroughly applied.