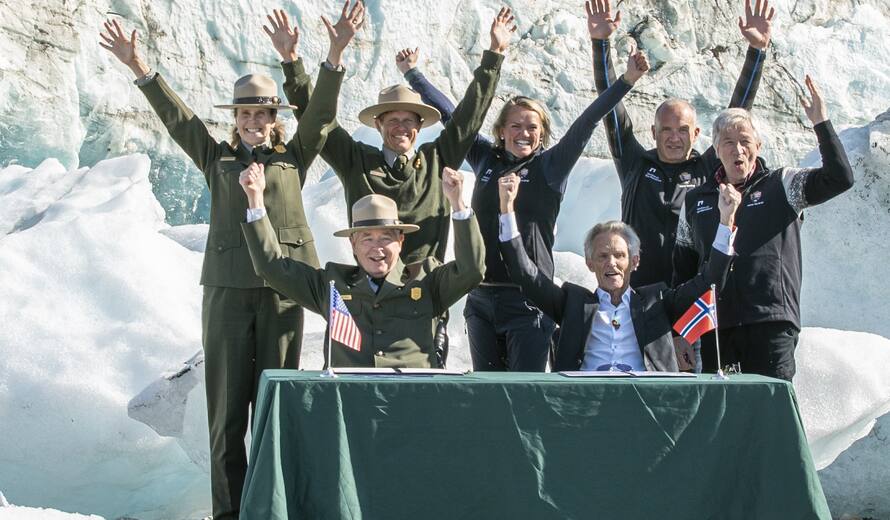 Two UNESCO World Heritage marine sites with similar conservation challenges signed an official Partnership Agreement to share ideas and best practices. The seeds of the agreement were sown at the 2010 World Heritage marine managers conference, and site-to-site exchanges over the past years were also central in achieving the recent zero emissions target for West Norwegian Fjords (Norway).

Against a backdrop of ice blocks and the Lamplugh Glacier, representatives from Glacier Bay National Park and Preserve (United States of America) and West Norwegian Fjords -  Geirangerfjord and Nærøyfjord (Norway) signed a Partnership Agreement in September 2019. The agreement between both World Heritage marine sites acknowledges the similarities between the two protected areas and promotes the sharing of ideas and best practices between site managers.

“This provides an incredible opportunity for protected areas that share so much to learn from each other,” said Glacier Bay Superintendent Philip Hooge, one of the signatories.

Management Board Chairman Arne Sandnes signed on behalf of the West Norwegian Fjords, with representatives from both sites looking on.

The signing event occurred during the recent fourth UNESCO World Heritage Marine Managers Conference held in Glacier Bay. This was the fourth of such gatherings for managers of flagship marine protected areas around the world to discuss challenges and share best practices on topics such as marine debris, tourism, working with indigenous populations, and adapting to climate change.

“Talking with the Norwegians it quickly became clear that both sites would benefit from sharing lessons learned, and continuing the dialogue regarding ongoing and emerging issues,” said Hooge.

Both protected areas feature scenic fjords that are popular destinations on cruise ship itineraries. Site managers at both locations also seek to work closely with local communities, including people with connections to the landscape that go back many generations.

Since the first World Heritage marine managers conference in 2010 in Hawaii, site representatives have shared management plans, research and monitoring protocols, and met several times to discuss challenges related to cruise tourism, environmental protocols, and interpretation and education programs. With the signing of the agreement managers anticipate those conversations will continue in the spirit of preserving the Outstanding Universal Values of both places for future generations.