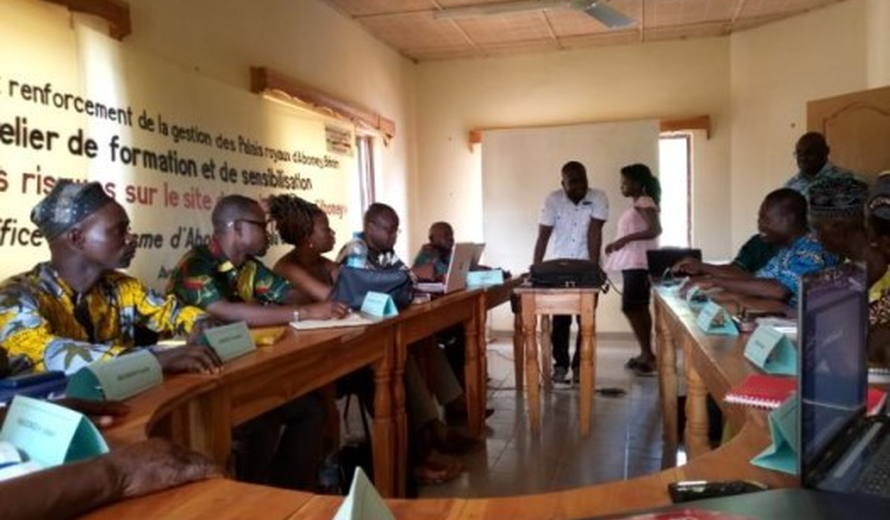 The project “Communities and reinforcement of the management of the Royal Palaces of Abomey World Heritage Site” financed by the Netherlands Funds-in-Trust was implemented from July 2017 to August 2018, in collaboration with the Ministry of Culture of Benin, the African World Heritage Fund (AWHF) and the School of African Heritage (EPA).

The project aimed to strengthen the state of conservation of the Royal Palaces of Abomey by improving the management of the site through enhanced involvement of local communities, in particular the royal families and local communities living at or near the site. In addition, this initiative was designed to contribute to the revitalization of traditional cultural practices at the Royal Palaces of Abomey.

The project included a wide range of on-site activities, such as a risk management workshop and round table (February 2018) and a training workshop for 10 tourist guides (July 2018), who are now able to train other guides. A series of studies were also conducted on the adaptive re-use of the Royal Palaces of Abomey and daily palace life in the 18th and 19th centuries. The activities and exchanges among the different stakeholders culminated in the creation of a programme of cultural activities and performances in the fields of music, danse and theatre, as well as the establishment of the Association for the Preservation and Promotion of the Royal Palaces of Abomey.

Local communities, particularly young people, demonstrated great interest in this project. By mobilizing young people in the framework of the above-mentioned Association and restoring constructive dialogue among the various stakeholders at the local, regional and national levels, the project reinforced the commitment on the part of local communities to support the effective management and preservation of the entire property. It also allowed to build capacity (through the training workshop for tourist guides) for the harmonious integration of the local communities in support of the site’s conservation and valorization.

Some of the activities mentioned in the programme of cultural activities such as the Danxomè festival planned for December 2018, will be organized as highlight events to close the project.