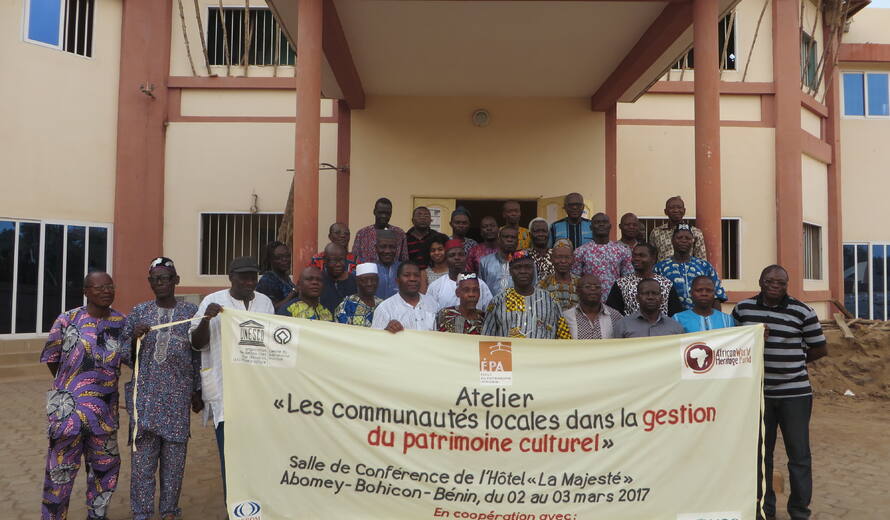 In collaboration with ICCROM, ICOMOS, AWHF and EPA, the Africa Unit of the World Heritage Centre organized a meeting of exchange and reflection on ways to strengthen involvement of local communities in the management of cultural heritage properties through concrete actions. The meeting took place at the Royal Palaces of Abomey World Heritage site in Benin on 2 and 3 March 2017.  This initiative is consistent with objectives 2 and 3 of the Action Plan 2012-2017 for the Africa Region, which highlight the need to “improve the state of conservation at World Heritage properties, by effective risk management, increased community involvement and direct economic benefits to local communities” and to “effectively manage existing properties by recognizing, documenting and formalizing traditional management systems and fully incorporating them into existing management mechanisms”. In addition, the operational action plan resulting from the international conference on Safeguarding African World Heritage as a Driver of Sustainable Development that took place in Arusha (Tanzania) in May/June 2016 stressed the need to promote meaningful participation of local communities in the conservation of sites, including the formalization of traditional management systems.

The main objectives of this workshop were to:

- Draw up an inventory of approaches and experiences developed by UNESCO's Advisory Bodies (ICOMOS, ICCROM and IUCN), experts and partners for the effective involvement of local communities in the management and conservation of cultural heritage properties and on this basis;

- Prepare pilot project documents focusing on the effective involvement of local communities in order to contribute to the implementation of the decisions of the World Heritage Committee at the following sites: the island of Saint-Louis (Senegal), the Cliffs of Bandiagara of the Dogon country (Mali); the Royal Palaces of Abomey (Benin) and the Cultural Landscape of Barotse (Zambia).

The participants proposed the following recommendations:

- Produce urgently an inventory of community actions in heritage management in Africa;

- Encourage States Parties, governmental and non-governmental organizations and the media to support the actions and mobilizations of communities for enhanced heritage management;

- Encourage many African partners and international and regional multilateral institutions to support efforts to protect cultural and natural heritage through the effective involvement of local communities.