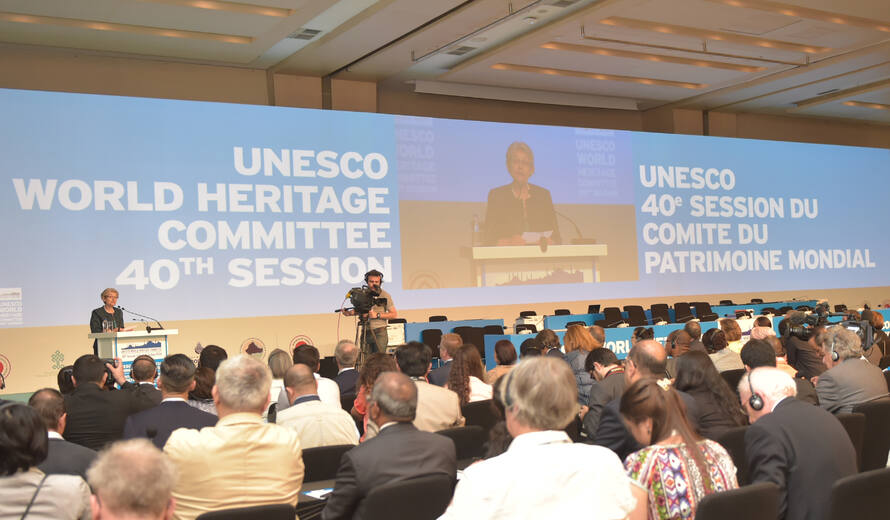 Istanbul, 10 July - The 40th session of the World Heritage Committee opened today in Istanbul (Turkey) under the chairmanship of Lale Ülker, Ambassador, Director General of Cultural Affairs and Promotion Abroad of the Turkish Ministry of Foreign Affairs. The opening ceremony was an opportunity to stress that World Heritage, which is now, more than ever, the subject of numerous threats, must remain a vector of cohesion and dialogue at the international level.

The Deputy Prime Minister Numan Kurtulmuş of Turkey, in his introductory remarks, said there is a fundamental role to be played by culture and heritage, a role made even more crucial in a period marked by wars and terrorist attacks. "UNESCO's mission is to protect our shared values ​​[...] and this role is even more crucial today as we live in difficult times," he said. "The best response to these attacks is not only political, but also artistic and cultural. We need to stand together."

UNESCO Director-General Irina Bokova said World Heritage embodies a revolutionary idea, “the idea that people of all cultures and faith can unite around outstanding universal value. When a World Heritage site is destroyed anywhere in the world, we all suffer, we are all diminished, even if it is from another region, another period, another culture,” she said. “What is at stake here is more than adding new sites on a list. It is about reaffirming human values and human rights. It is about healing wounded memories, harnessing heritage to regain confidence, to recover and look into the future,” the Director-General added.

Turkish Culture Minister Nabi Avcı meanwhile insisted on the fact that UNESCO is best placed to promote cooperation. “UNESCO is the banner-holder of soft power, a fundamental principle upon which peace can be built,” he said.

“Nowadays, we all witness threats to World Heritage. To attack heritage is to attack history, identity and values of people,” said Committee Chairwoman, Ambassador Ülker. “In front of such threat, we have to stand united. During our session, on the basis of actions already undertaken, we will discuss further measures to face these threats.”

President of the General Conference Stanley Mutumba Simataa spoke to the relevance of the World Heritage Convention. “At a time of ever increasing threats to natural and cultural sites, the Convention is a key tool to empower the international community to safeguard, protect, promote and transmit our heritage to future generations.”

“In this regard, I strongly believe it is our duty to strengthen the role of UNESCO in the protection of heritage in conflict areas and to ensure the protection and preservation of sites in areas affected by natural disaster,” said Ambassador Michael Worbs, Chairperson of the Executive Board of UNESCO.

Many celebrities, including Kadir Topbaş, Mayor of Istanbul or Öcal Oğuz, President of the Turkish National Commission for UNESCO, took part in this ceremony attended by some 800 participants.

The 27 nominations that will be examined are:

Accreditation: Journalists wishing to cover the Committee's work are requested to apply for a code: Nesrin Alp, nesrin.alp(at)byegm.gov.tr
And then proceed to online registration