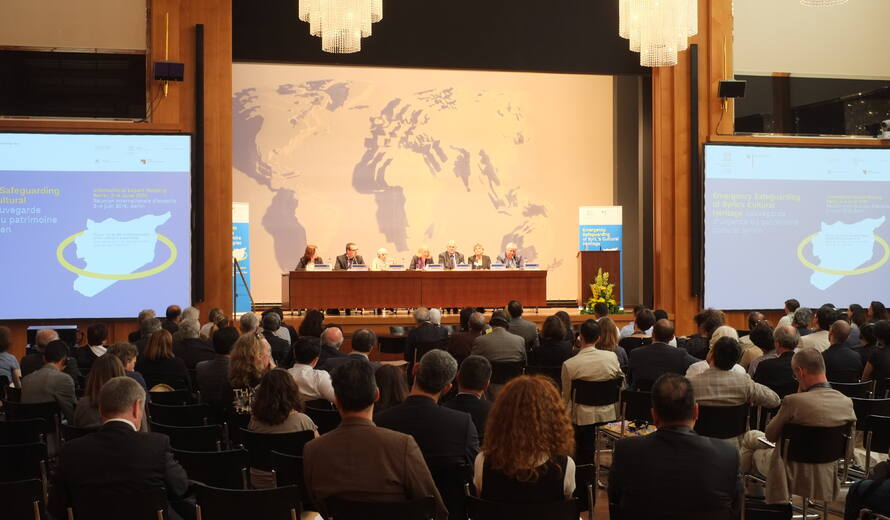 © German Commission for UNESCO / Till Budde

Some 230 Syrian and international experts joined forces in a two-day meeting to assess damage to cultural heritage sites in Syria, develop methodologies and define priority emergency safeguarding measures for the country’s heritage. The expert meeting, held in Berlin from 2 to 4 June, was organized by UNESCO and Germany. It was opened by Irina Bokova, Director-General of UNESCO, and Maria Böhmer, Minister of State for Foreign Affairs of Germany

Conference participants included leading archaeologists, anthropologists, experts in monument preservation, architects and urban planners. Among them were representatives of the Syrian Antiquities Directorate (DGAM) as well as other scientists and experts from or working in Syria.

“The Berlin conference has given a very positive signal to lay the cultural foundations of a post-war Syrian order. The World Heritage Sites shape Syrian identity and will be decisive for the unity of the country. A Herculean task will have to be tackled sooner or later. It needs sound foundations,” said Ms Böhmer.

“To succeed,” cautioned Ms Bokova “we must bring together the best of international expertise, guided by the principle that culture must not be manipulated or instrumentalized, and I thank all Syrian and international experts united here for heritage: this is the spirit of Berlin.”

Zoya Masoud, one of the young experts at the Conference, said: “It is urgent to involve us as the young generation in the future planning of the conservation and rehabilitation of our heritage. For this reason we propose to set up a mentoring system bringing together young experts and established professionals for the protection of cultural heritage.”

Participants took stock of the work achieved so far by local and international actors. They proposed practical measures to address damage assessment, mapping and inventories, legal and institutional frameworks, technical assistance, including first aid measures for built heritage, and capacity building, as well as communication and awareness-raising. Concrete measures were identified for historic cities, archaeological sites, museums, movable objects and intangible heritage and added to the UNESCO Recommendations and Road Map, adopted in 2014.

Participants also addressed the critical and persistent issue of looting and illicit trafficking of cultural heritage. They called for a comprehensive list of looted objects from Syria to complement the International Council of Museum’s existing Red List and appealed on all governments to implement United Nations Security Council Resolutions banning the trade in cultural heritage from the country.

The experts furthermore appealed to international funding and development agencies to include cultural heritage in major funding programmes and post-conflict recovery plans.

The meeting paved the way for UNESCO to update and develop the Action Plan for the Emergency Safeguarding of Syria’s Cultural Heritage, adopted during UNESCO’s first expert meeting on Syria in 2014.

“The meeting proved that all stakeholders are capable and willing to work together to safeguard Syria´s cultural heritage,” said Nazir Awad, Director of Historic Buildings Department. “We hope that this meeting will open doors for further support.”

Several Syrian experts emphasized the need to unite all efforts to achieve the common goal of safeguarding and preserving cultural heritage. All the participants noted the great potential of culture in supporting humanitarian response, social cohesion and dialogue. They also stressed the crucial role of DGAM, NGOs and civil society—notably Syrian citizens risking their lives to protect heritage—in achieving these goals and requested more help from the international community to support their actions.

Held two years after UNESCO’s first emergency expert meeting on Syria, the Berlin conference had three main objectives: exchange information on the condition of all Syrian heritage sites, find a consensus on initial priorities and emergency measures, coordinate all actions and to share a common vision.

At the end of the conference, the experts presented proposals to improve the future prospects of Syria’s heritage through post-conflict recovery plans. They notably stressed the need for capacity building initiatives in all parts of the country and emphasized the need for a considerable increase of resources and support. They highlighted the need to involve all stakeholders, including humanitarian actors, and stressed the central role of local communities and of UNESCO’s coordination work.

At the close of the meeting, Mechtild Rössler, Director of UNESCO’s World Heritage Centre, pointed out the pivotal role of culture and identity and the need to protect cultural heritage. “I thank all participants for their constructive contribution and approach. We need such a spirit of cooperation to work together both on future plans for the recovery phase and also on current projects underway for the emergency safeguarding of the cultural heritage of Syria.”

The international expert meeting was jointly organized by UNESCO and the German Federal Foreign Office in cooperation with the German Archeological Institute, the Prussian Cultural Heritage Foundation, the Gerda Henkel Foundation and the German Commission for UNESCO.