Attacks against Cultural Heritage – What can UNESCO do? 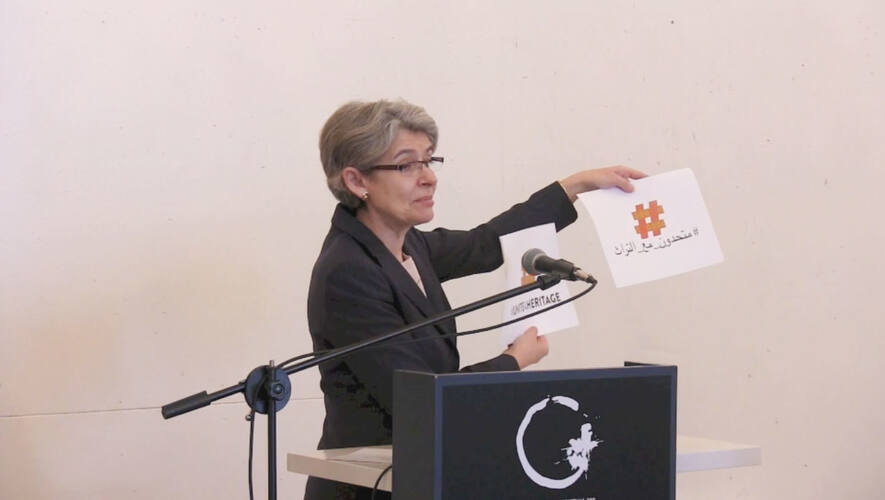 On 4 May, on the occasion of her official visit to Estonia, the Director General, Ms Irina Bokova, gave a lecture at the Estonian Academy of Arts on “Attacks against Cultural Heritage – What can UNESCO do?”, in the presence of the Rector of the Academy Professor Signe Kivi, and the Ambassador and Permanent Representative of the Republic of Estonia to UNESCO, H.E. Mr Marten Kokk.

The lecture was given in the remarkable main building of the Academy, before a room full of students, professors and experts.

“Culture is much more than monuments and books – culture is who we are,” declared the Director-General, giving the example of Tallinn, whose origins date back to the 13th century and is today the capital of one of the most high-tech countries in the world, as well as the capital of design. The Historic Centre of Tallinn was inscribed on UNESCO’s World Heritage list in 1997.

“No society can flourish without culture,” she continued. “No development can be sustainable without it”.

“Culture has always been the victim of conflict – but what we see today is different,” she said referring to the unprecedented cultural cleansing we see in Iraq and Syria.

“These are attacks against the shared history of all humanity. Violent extremists target monuments and sites, to strike populations at their core, because they know culture is the cornerstone of social fabric.”

The Director-General gave an overview of UNESCO’s action in response to cultural cleansing, to mitigate risks of destruction and pillaging, through monitoring and capacity-building, to fight illicit trafficking, working with neighboring countries, and to document in detail what has been destroyed and prepare for reconstruction. She underlined the importance of the #Unite4Heritage campaign that she launched in the University of Baghdad in March to counter the propaganda of violent extremism and to strengthen the narrative of humanity united around shared values.

She also highlighted UNESCO’s work in Mali to rebuild the mausoleums that were destroyed two years ago in Timbuktu, and to rebuild the old bridge of Mostar in Bosnia and Herzegovina, as well as the Organization’s work to help save the temples of Nubia in Egypt.

“No culture stands alone – each reflects centuries of exchange and dialogue between people, across all borders. This is UNESCO’s message and this is why UNESCO does everything to safeguard cultural heritage across the world, to strengthen humanity as a single community,” said Irina Bokova.

The lecture was followed by a rich discussion that covered prevention and enforcement, as well as digitisation and the role of young people.