The Area de Conservación Guanacaste (inscribed in 1999), was extended with the addition of a 15,000 ha private property, St Elena. It contains important natural habitats for the conservation of biological diversity, including the best dry forest habitats from Central America to northern Mexico and key habitats for endangered or rare plant and animal species. The site demonstrates significant ecological processes in both its terrestrial and marine-coastal environments. 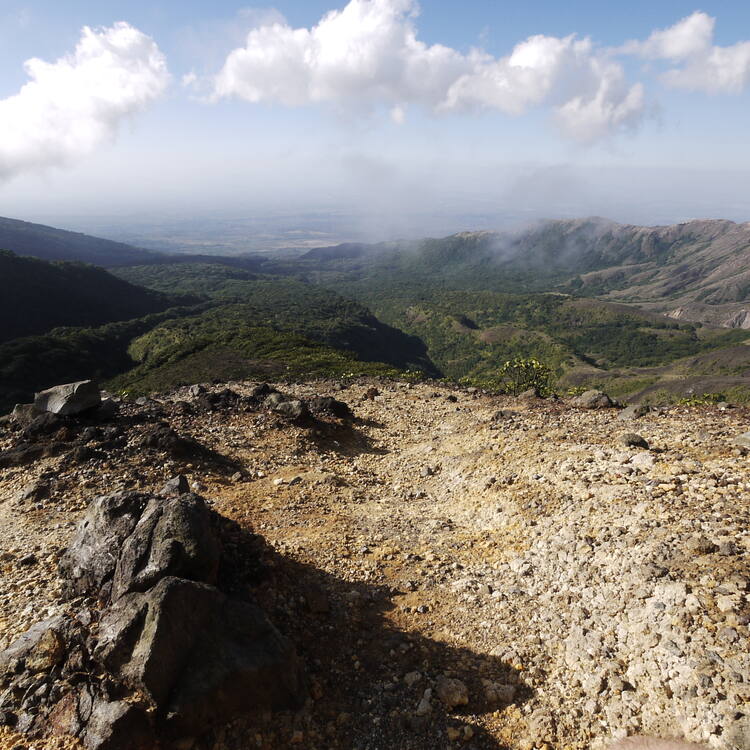 The Area de Conservación Guanacaste comprises 147,000 hectares of land and sea in the Northwest of Costa Rica. Encompassing several contiguous protected areas of various categories, the property is a mosaic of diverse ecosystems. The 104,000 hectares of land encompass a continuum of roughly 100 kilometres from the shore of the Pacific to the lowland rainforests in the Caribbean basin. Along the way, the gradient passes a varied coastline, the Pacific coastal lowlands and much of the western side of the Guanacaste Range peaking at Rincón de la Vieja at 1,916 m.a.s.l. The many forest types comprise a large tract of tropical dry forest, an often overlooked, highly vulnerable global conservation priority. Furthermore, there are extensive wetlands, numerous water courses, as well as oak forests and savannahs. The largely intact coastal-marine interface features estuaries, rocks, sandy and cobble beaches rimming the 43,000 hectares of marine area with its various, mostly uninhabited near-shore islands and islets. Major nutrient-rich cold upwelling currents offshore result in an exceptionally high productivity of this part of the Pacific.

The visually dramatic landscape mosaic is home to an extraordinary variety of life forms. Next to the approximately 7,000 plant species, more than 900 vertebrate species have been confirmed. Some notable mammals include the endangered Central American Tapir, at least 40 species of bat, numerous primate species and several felids, namely Jaguar, Margay, Jaguarundi and Ocelot. Among some 500 bird species are the endangered Mangrove Hummingbird and Great Green Macaw, as well as the vulnerable Military Macaw and Great Curassow. Diversity of reptiles and amphibians is likewise high with charismatic representatives like the vulnerable American Crocodile and Spectacled Caiman. Several species of sea turtles occur in the property, with a nesting population of the critically endangered Leatherback and a massive breeding population of the vulnerable Olive Ridley. Invertebrate diversity is extraordinary with an estimated 20,000 species of beetles, 13,000 species of ants, bees and wasps and 8,000 species of butterflies and moths.

Criterion (ix): A striking feature of Area de Conservación Guanacaste is the wealth of ecosystem and habitat diversity, all connected through an uninterrupted gradient from the Pacific Ocean across the highest peaks to the lowlands on the Caribbean side. Beyond the distinction into land and sea, the many landscape and forest types comprise mangroves, lowland rainforest, premontane and montane humid forest, cloud forest, as well as oak forests and savannahs with evergreen gallery forests along the many water courses. Along the extraordinary transect the property allows migration, genetic exchange and complex ecological processes and interactions at all levels of biodiversity, including between land and sea. The vast dry forest is a rare feature of enormous conservation value, as most dry forests elsewhere in the region are fragmented remnants only. Conservation has permitted the natural restoration of the previously degraded forest ecosystem, today serving again as a safe haven for the many species depending on this acutely threatened ecosystem. Major nutrient-rich cold upwelling currents offshore result in a high marine productivity and are the foundation of a diverse coastal-marine ecosystem containing important coral reefs, algal beds, estuaries, mangroves, sandy and cobble beaches, shore dunes and wetlands.

Criterion (x): The property is globally important for the conservation of tropical biological diversity as one of the finest examples of a continuous and well-protected altitudinal transect in the Neotropics along a series of marine and terrestrial ecosystems. The enormous variation in environmental conditions favours a high diversity, with two thirds of all species described for Costa Rica occurring within the relatively compact area. Coexisting in the property, there are more than 7,000 species of plants, as diverse as Mahogany in the lush forests and several species of agaves and cacti in drier areas. Over 900 vertebrates have been confirmed. Some notable mammals include the endangered Central American Tapir, at least 40 species of bat, Jaguar, Margay, Jaguarundi and Ocelot, as well as numerous primate species. Among some 500 bird species are the endangered Mangrove Hummingbird and Great Green Macaw, and the vulnerable Military Macaw. Charismatic representatives of reptiles include the vulnerable American Crocodile and the Spectacled Caiman. Several species of sea turtles occur in the property, with the critically endangered Leatherback nesting and a massive breeding population of the vulnerable Olive Ridley. Invertebrate diversity is extraordinary with an estimated 20,000 species of beetles, 13,000 species of ants, bees and wasps and 8,000 species of butterflies and moths.

The transect from the waters of the Pacific across more than 100 kilometres inland constitutes an impressive altitudinal and climatic range, making the Area de Conservacion Guanacaste an ideal place for the conservation of dynamic ecological and biological processes at the scale of a landscape. This is critical for the range, migration and life cycles of many animal species but also for plants and entire communities expected to respond to changing environmental conditions. The largely intact coastal-marine interface is remarkable, particularly in a region where coasts have disproportionally suffered from human pressure. The Pacific and the connected coastal ecosystems like mangroves, wetlands and estuaries mutually protect each other and the associated biological and ecological processes. The remoteness and the rocky, swampy terrain provide a high degree of natural protection of this interface. The ongoing natural regeneration of the large, previously exploited tropical dry forest ecosystem within the property is an indicator of intact processes, favoured by the size, conservation efforts and functioning interaction with neighbouring ecosystems. Adding to the integrity are several connected protected areas in the vicinity of the property, which help avoid genetic isolation, buffer disturbance and facilitate conservation and natural regeneration. Small peripheral areas are regularly bought and added to the protected area and lend themselves for future incorporation into the property.

Area de Conservacion Guanacaste is a conservation complex comprised of contiguous protected areas which has expanded over time. The property continues to have potential for further extension, which is an explicit management objective. The formal conservation history goes back to 1971 when Santa Rosa National Park was created to conserve a stretch of land and sea of high conservation valuable. Over the years new national parks, a wildlife refuge and an Experimental Forest Station were established and added. Most of the property is state-owned, except for a corridor owned by the parastatal foundation Fundacion de Parques Nacionales. The administrative unit is headed by a Director and under the overall authority of the Ministry of Environment and Energy. Oversight and participation is foreseen through technical, local, as well as regional councils. The integrated management has the dual long-term objective of conservation and restoration. More specifically, management objectives include incorporation of adjacent areas of conservation interest, payment for environmental services schemes; ecological research and outreach programs. The property enjoys a diverse funding structure with both governmental and non-governmental sources. Entrance fees likewise contribute in addition to a heritage fund established through a debt-for-nature swap. Despite the diverse funding structure, additional and sustainable funding schemes are needed to enhance the operational management capacity in the face of mounting challenges.

After historic use by local indigenous groups, the remote and economically marginalised region was exploited for around four centuries in opportunistic form. Past human impacts include clearing of forests for pasture, logging and indiscriminate hunting. However, the poor soils, erratic climate and geographic isolation set natural limits to resource use and land conversion which is why no transformation beyond the natural restoration capacity appears to have occurred. On land, current threats stem from agriculture outside the property, namely pollution by pesticides, deviation of water for irrigation and introduced exotic grasses. Other possible developments outside the property requiring careful balancing between negative impacts and benefits include increasing tourism, road construction and hydropower. Fishing by local fishermen have shown a decrease in the size of fish and an increase in the effort required per catch, which constitutes a clear indication of declining populations. Stronger efforts in marine conservation are needed to respond to uncontrolled commercial and sport fishing but also to regulate tourism along the coast.