At 5,199 m, Mount Kenya is the second highest peak in Africa. It is an ancient extinct volcano, which during its period of activity (3.1-2.6 million years ago) is thought to have risen to 6,500 m. There are 12 remnant glaciers on the mountain, all receding rapidly, and four secondary peaks that sit at the head of the U-shaped glacial valleys. With its rugged glacier-clad summits and forested middle slopes, Mount Kenya is one of the most impressive landscapes in East Africa. The evolution and ecology of its afro-alpine flora provide an outstanding example of ecological and biological processes. Through the Lewa Wildlife Conservancy and Ngare Ndare Forest Reserve, the property also incorporates lower lying scenic foothills and arid habitats of high biodiversity, situated in the ecological transition zone between the mountain ecosystem and the semi-arid savanna grasslands. The area also lies within the traditional migrating route of the African elephant population. 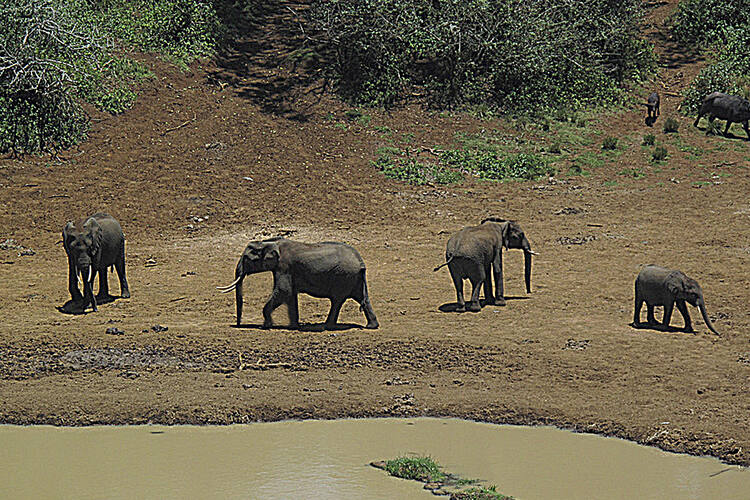 Mount Kenya straddles the equator about 193 km north-east of Nairobi and about 480 km from the Kenyan coast. At 5,199 m, Mount Kenya is the second highest peak in Africa and is an ancient extinct volcano. There are 12 remnant glaciers on the mountain, all receding rapidly, and four secondary peaks that sit at the head of the U-shaped glacial valleys. With its rugged glacier-clad summits and forested middle slopes, Mount Kenya is one of the most impressive landscapes in East Africa. The evolution and ecology of its afro-alpine flora also provide an outstanding example of ecological processes.

The property includes the Lewa Wildlife Conservancy and Ngare Ndare Forest Reserve (LWC-NNFR) to the north. The two component parts of the property are connected via a wildlife corridor which is part of the buffer zone for the property, and which provides vital connectivity for elephants moving between Mount Kenya and the larger conservation complex of the Somali/Maasai ecosystem. The LWC-NNFR extension incorporates the forested foothills and steep valleys of the lower slopes of Mount Kenya and extends northwards onto the relatively flat, arid, volcanic soils supporting grassland and open woodland communities on the Laikipia plain.

Criterion (vii): At 5,199 m, Mount Kenya is the second-highest peak in Africa. It is an ancient extinct volcano, which during its period of activity (3.1-2.6 million years ago) is thought to have risen to 6,500 m. The entire mountain is deeply dissected by valleys radiating from the peaks, which are largely attributed to glacial erosion. There are about 20 glacial tarns (small lakes) of varying sizes and numerous glacial moraine features between 3,950 m and 4,800 m asl. The highest peaks are Batian (5,199 m) and Nelion (5,188 m). There are 12 remnant glaciers on the mountain, all receding rapidly, and four secondary peaks that sit at the head of the U-shaped glacial valleys.

With its rugged glacier-clad summits and forested middle slopes, Mount Kenya is one of the most impressive landscapes in East Africa. This setting is enhanced by the visual contrast and diversity of landscapes created between the Kenyan Highlands and Mount Kenya looming over the flat, arid, grassland and sparse wooded plains of the Lewa Wildlife Conservancy extension to the north.

Mount Kenya is also regarded as a holy mountain by all the communities (Kikuyu and Meru) living adjacent to it. They use the mountain for traditional rituals based on the belief that their traditional God Ngai and his wife Mumbi live on the peak of the mountain.

Criterion (ix): The evolution and ecology of the afro-alpine flora of Mount Kenya provides an outstanding example of ecological processes in this type of environment. Vegetation varies with altitude and rainfall and the property supports a rich alpine and subalpine flora. Juniperus procera and Podocarpus species are predominant in the drier parts of the lower zone (below 2,500 m asl). Cassipourea malosana predominates in wetter areas to the south-west and north-east. Higher altitudes (2,500-3,000 m) are dominated by bamboo and Podocarpus milanjianus. Above 3,000 m, the alpine zone offers a diversity of ecosystems including grassy glades, moorlands, tussock grasslands and sedges. Continuous vegetation stops at about 4,500 m although isolated vascular plants have been found at over 5,000 m.

The Lewa Wildlife Conservancy and Ngare Ndare Forest Reserve component of the property incorporates lower lying, scenic foothills and arid habitats of high biological richness and diversity. The component lies at the ecological transition zone between the Afro Tropical Mountain ecosystem and the semi-arid East African Savannah Grasslands. Lewa Wildlife Conservancy and Ngare Ndare Forest Reserve also lie within the traditional migration route of the African elephant population of the Mount Kenya – Somali/Maasai ecosystem and has always been the traditional dry season feeding area for elephants.

The serial property comprises Mount Kenya National Park managed by the Kenya Wildlife Service (KWS) and parts of the Mount Kenya Forest Reserve managed by the Kenya Forest Service (KFS). Both these protected areas are designed to protect the main natural values and the watershed of the mountain above the 2,000 - 2,500m elevations. To the north the property is connected via a 9.8 km elephant corridor to the Lewa Wildlife Conservancy and Ngare Ndare Forest Reserve (LWC-NNFR) which adds lowland drier ecosystems and habitats and a suite of additional species to the property. The corridor is within the buffer zone but critical to maintain ecological connectivity between the two components of the property. Despite a number of threats to the property, wildlife populations, though reduced from the years prior to the first inscription of the property on the World Heritage List, are still considered healthy.

The boundaries of the property on the main area of Mount Kenya are limited to the upper reaches of the mountain above the montane forest zone and most of the forest destruction, illegal grazing, poaching and other human activities which impact the broader ecosystem are occurring outside the property, in the area of forest/national reserve that serves as a ‘buffer zone’. Understanding and mitigating these threats to the broader ecosystem is important because they impact the long-term viability of the property.

Climate change is probably one of the most serious long-term threats to the site. Glaciers are melting fast and appear destined to disappear altogether within a few decades. As the climate warms the vegetation zones can be expected to shift higher up the mountain. For example, the lower parts of the bamboo zone (which occur at the lower limit of the property) will likely gradually be replaced with mixed montane forest. It is essential that the threat of climate change is buffered through enhanced connectivity and ensuring that natural habitats covering the full range of altitude are maintained as a continuum, thus providing ecosystem resilience and allowing for adaptation to the inevitable change. The LWC-NNFR by establishing the corridor and regional linkages via several conservancies to link with Samburu National Park, Shaba National Reserve and Buffalo Springs to the north and beyond to the Matthew’s Range is a significant proactive intervention to mitigate climate change impacts on the biodiversity of this region of East Africa providing mobility for biodiversity to adapt to changing temperature and rainfall regimes.

The property’s legislative framework is generally sound and provides for adequate protection of the site. The most relevant legislation is provided by the Wildlife Act, the Environment Management and Coordination Act (1999), the Water Act (2002), and the Forest Act (2005). The Government of Kenya, through KWS has promoted the formation of wildlife conservancies amongst owners of large tracks of land especially amongst local communities as a long-term strategy to increase range for biodiversity conservation and management in the country. LWC is managed for the conservation of biological diversity and thus has met the national legal requirements for designation as a conservancy. In addition the National Land Policy of the Ministry of Lands supports the establishment of corridors for biodiversity conservation.

Three institutions require close coordination to manage the serial property. These include KWS and KFS as well as the Lewa Wildlife Conservancy managed through a Board of Trustees. KWS and KFS are signatories to the Mount Kenya Ecosystem Management Plan which provides an overarching management planning framework. It is essential that the separate management plans applying to the components of the property are harmonised in terms of management approaches and timeframes.

More sustainable management of various sections of the forest has been supported through the establishment of Community Forestry Associations (CFAs) and the production of operational forest management plans and related agreements signed between KFS and the CFAs.

There is a major problem with crop damage caused by elephant, buffalo and other large mammals moving into fields along the lower boundary of the Mount Kenya National/Forest Reserve. Various attempts have been made to mitigate this human-wildlife conflict problem by fencing and construction of other barriers to stop animals moving out of the reserve. These have had mixed results, nevertheless, as experience has shown elsewhere, effective and well considered fencing is likely to be the best option for mitigating human/wildlife conflict in such a densely populated landscape.

Threats from illegal logging, grazing, poaching and tourism are being managed and appear to be stable notwithstanding on-going issues. Continued monitoring and effective management of these issues will be needed. Fire is a major threat, especially in the high altitude moorlands of the World Heritage property. The threat is exacerbated by the increasing number of people living around the periphery of the forest, and making daily incursions up the mountain to graze livestock and collect non-timber forest products. Stakeholders have jointly developed a Mount Kenya Hotspot Strategic Fire Plan to guide future fire preparedness within the ecosystem.

The maintenance of the 9.8km elephant corridor connecting Mount Kenya to the lowland areas of the LWC-NNFR is critical to provide a contiguous link between the two components of the property, thereby supporting wildlife movements and buffering against climate change impacts. It is also critical to explore other opportunities to create connectivity within the larger ecosystem complex to enhance the ecological viability of the property.