Kujataa is a subarctic farming landscape located in the southern region of Greenland. It bears witness to the cultural histories of the Norse farmer-hunters who started arriving from Iceland in the 10th century and of the Inuit hunters and Inuit farming communities that developed from the end of the 18th century. Despite their differences, the two cultures, European Norse and Inuit, created a cultural landscape based on farming, grazing and marine mammal hunting. The landscape represents the earliest introduction of farming to the Arctic, and the Norse expansion of settlement beyond Europe. 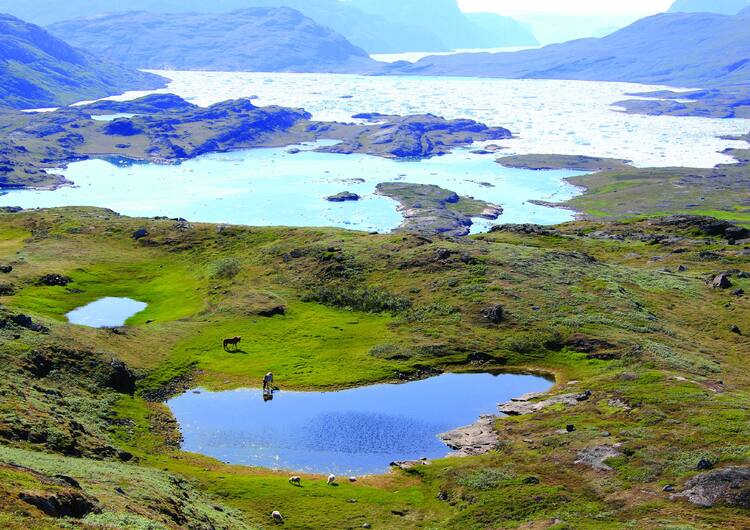 Horses and sheep grazing in a highland meadow near Tasiusaq. In the background the ice-filled Tasiusaq Fjord. © Niels Christian Clemmensen / Christian K. Madsen

Kujataa is a sub-arctic farming landscape located in the southern region of Greenland. The cultural landscape is comprised of dramatic natural features and processes that have shaped the farming and grazing traditions in two distinct periods and cultures: Norse Greenlandic people (10th to 15th century) and modern Inuit farmers (18th century to present). The property consists of five components, which together represent the demographic and administrative core of the two farming cultures.

Although these two cultures are distinct, each are pastoral farming cultures situated on the Arctic margins of viable agriculture, relying on a combination of farming, pastoralism and marine mammal hunting. The cultural landscape represents the earliest introduction of farming to the Arctic, and the Norse expansion of settlement beyond Europe. The Norse farming settlements laid the physical foundations for Inuit farming in Greenland many centuries later.

The attributes of the property include the structures and archaeological sites and artefacts associated with the Norse settlement of Kujataa; the home fields of the farms, pasturelands and meadows; vegetation patterns associated with farming and grazing; the landscape settings (including landforms and ecological characteristics) of the five components; Inuit farming houses and associated buildings (listed historic buildings); and a wealth of intangible attributes including language, historical place names, ecological knowledge, crafts and seasonal rituals and activities.

Criterion (v): Kujataa is an outstanding example of human settlement. Although marginal for farming, the relatively mild climate of southern Greenland has allowed the development of settlements based on farming and hunting during two major historical periods: the Norse Greenlandic farming settlement from the 10th to the 15th centuries, and Inuit-European farming from the 1780s to the present.

Norse Greenlandic and Inuit farming settlement have resulted in distinctive and vulnerable cultural landscape based on land use practices within a specific ecological niche that could support farming and pastoralism when complemented with the hunting of marine mammals. The specific climatic conditions that allowed two different cultural traditions to develop land use, settlement and subsistence within this extreme setting have allowed the Inuit farming landscape to reveal and visualize the earlier Norse settlements in an exceptional way.

All the elements necessary to convey the Outstanding Universal Value occur within the five components of the property, including key attributes of the Norse and Inuit farming systems. They illustrate different facets of farm types, land use patterns, landforms and cultural histories. In some places, modern Inuit farms juxtapose relict Norse farms, while others are relatively undisturbed archaeological landscapes where sheep grazing maintains the pastoral character of the abandoned Norse farm sites.

The condition of the attributes is satisfactory, and while there are potential threats, these are adequately managed. The integrity of the property is considered vulnerable due to the range and scale of proposed mining, energy and infrastructure development projects in this area of southern Greenland. The commitments made by the State Party to establish legal protection for the buffer zones will assist in improving the integrity of the property.

The authenticity of the cultural landscape is based on its pastoral character, introduced from the 10th century AD. The archaeological evidence of Norse Greenlandic settlement and farming are found at a substantial number of heritage sites within the components and the form, materials and design of farm buildings and monumental architecture are from both historical periods. The settlement patterns of the Norse landscape are legible in and between the selected components.

Conservation of architectural attributes has aimed to ensure their structural stability; and most archaeological sites have not been modified by human activity since their abandonment. Detailed historical documentation supports the authenticity of many attributes.

Further documentation of the Palaeo-Eskimo, Thule Inuit and post-18th century farming landscapes, including the mapping of hunting resources and sites, will assist in further understanding of the cultural landscape.

Protection of the landscape and natural attributes is provided by a wide range of laws and planning regulations, including the Acts on Preservation of Natural Amenities, Environmental Protection and Catchment and Hunting as well as laws pertaining to the different land uses within and outside the property, and the Executive Order on Cultural Heritage Protection (July 2016). The Nature Protection Act (Act no. 29, 18 December 2003) provides for the management of landscape values and the sustainable use of natural resources, including agriculture. The Executive Order on Cultural Heritage Protection (July 2016) provides the essential overall protection for the cultural heritage and attributes of the World Heritage property.

Aside from ongoing environmental pressures (including those associated with climate change), the main threats to the property are mining and infrastructure development, and intensification of agriculture. Greater attention and detailed planning is also needed for the area’s future tourism management.

As land is not privately owned in Greenland, activities and constructions require land use approvals from the Kujalleq Municipality or the Government of Greenland. The Greenland National Museum and Archives is one of the authorities responsible for reviewing land use applications as relating to protected heritage values; and the Greenland National Museum and Archives function as advisory consultant in land use project developments, as well as monitoring of heritage values. Any disturbance and demolition of heritage sites is prohibited and punishable by law.

Approvals for activities related to mineral resources are subject to strict legal requirements through the Mineral Resources Act (7 December 2009). Exploitation license applications are subject to for example Environmental Impact Assessment and Social Impact Assessment (each with public hearing and consultation requirements) and must have an impact mitigation plan. The Greenland National Museum and Archives can require archaeological investigations. Heritage Impact Assessment processes are needed for development proposals, mining exploration and changes to agricultural land uses.

The property is governed and managed by a steering group with representatives from the Government of Greenland, the Greenland National Museum and Archives, Kujalleq Municipality, village councils, farmers, the Danish Agency for Culture and Palaces and the tourism industry. Engagement of local people in the nomination and management processes has been well-established.

The management system provides a framework for decision-making, and will be implemented from public financial commitments. The management plan, in which priorities are defined, such as sustainable tourism, local and indigenous ownership, engagement and sustainable development, has been approved by the Government of Greenland and Kujalleq Municipality. The day-to-day management will be carried out by a local secretariat headed by a site manager and field staff consisting of one or more park rangers working in close collaboration with the authorities represented in the steering group.

Resources for implementation of the management system could be increased, and additional mechanisms are necessary for sustained and direct engagement with authorities responsible for mining approvals and monitoring, and coordination amongst relevant organisations should be further strengthened. A National Tourism Strategy (2016-2020) foreshadows enhancement of harbours and the airport, and the Tourism Strategy of the Kujalleq Municipality (2015- 2020) has a focus on improved coordination and branding initiatives focussing on the Arctic Vikings and agro-tourism.