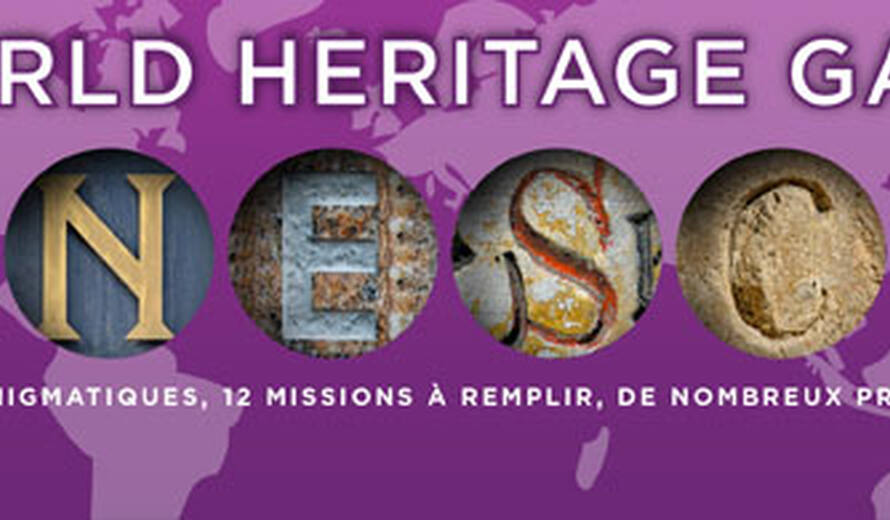 From July 1st to December 24th 2012, the second edition of the World Heritage Game will be online at www.worldheritagegame.com. For six months, players can discover the whereabouts of the six letters of UNESCO photographed at different World Heritage sites. Many prizes can be won, including a discovery tour to one of these sites.

The game features 12 complete missions. Each mission involves choosing where the six letters of UNESCO were photographed, from a possible choice of six World Heritage sites. These photos, along with other images and clues, are published online at www.worldheritagegame.com. Further clues will be published between 14 July and 31 August in the Le Monde newspaper and on its Internet site www.lemonde.fr. Inscription in the game is free for any person over 18 years old with an Internet connection.

The communications agency Chez Bonne Idée produced the first edition of the game in 2011. In 2012 and on the occasion of the 40th anniversary of the World Heritage Convention, Chez Bonne Idée is an official partner of UNESCO. The French national newspaper Le Monde and its Internet site www.lemonde.fr are publishing the game during the summer for the second consecutive year.

In order to augment its library of photographed letters, and to promote the game to a wider public, Chez Bonne Idée has launched a photo competition. This competition is aimed at all those who live near, or are visiting, a site inscribed on the World Heritage list. Participation involves finding and photographing the letters UNESCO at this site and then uploading them to www.worldheritagegame.com/photos; the best photos will be published on the website, and then at an exhibition in the UNESCO Headquarters in Paris.

if you would like your site to participate in the 2013 edition, you can register now at the following address www.worldheritagegame.com/2013edition