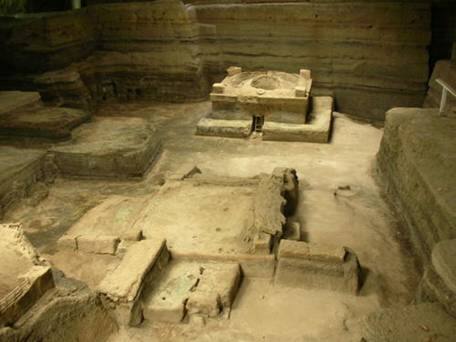 Joya de Cerén is the name given to a rural settlement dating back to the period of the Mayan civilization. The site provides a unique window into the past.

Buried in the 6th century, during a volcanic eruption, vestiges of the city have been preserved in a remarkable condition rarely found, highlighting a continuity of lifestyle. From ceramics to cultivated fields, numerous elements characterising contemporary agricultural communities of Central America have been uncovered, as if frozen in time, at the archaeological site. The site was inadvertently discovered in 1976, and archaeological excavations were carried out until 1981 under the direction of Dr. Payson Sheets. The excavation findings were striking. Inscribed on the World Heritage List in 1993, Joya de Cerén Archaeological Site is situated in the Zapotitan Valley, in La Libertad, 35 km to the west of San Salvador, El Salvador.

The CCCAC (culture and cooperation centre for Central America), which coordinates French cooperation in the region, the Dirección de Turismo del Sistema de la Integración Centroamericana or DITURSICA (tourism department of the Central American integration system), and the ministry in charge of tourism in France, which identified Central America as a priority area, developed a “Central American World Heritage Route” project. From 2005 to 2007, under the framework of the France-UNESCO Cooperation Agreement, two French experts developed a pilot project on tourism management for Joya de Cerén Archaeological Site.

This project began during a seminar in Panama (6 and 7 December 2006) with representatives from seven countries and involved the ministries of culture, tourism, and environment. Subsequently, the ministries for social integration became involved as it falls under the Millennium Goals to eradicate extreme poverty.