On 26 July 2002, concerned citizens informed the Centre about construction works in the vicinity of the Saint-Sophia Cathedral. According to their report, a two-storey underground parking lot, swimming pool and fitness centre was under construction. Large concrete walls were reported to have blocked the drainage of underground sources, causing water to flow into the foundations of the Cathedral and the Belfry. The report drew attention to the destabilisation of the ground, allegedly provoked by the changed watercourse, which has caused the buildings to crack, given that the Saint Sophia Cathedral is built over quicksand.

On 23 September 2002, the national authorities responded with a report stating that the construction projects had been halted and that the elaboration of an action plan for 2002-2004 had been initiated for research and restoration as well as for a conservation programme for the period until 2010. The Ukrainian National Commission for UNESCO stated, on 28 January 2003, that the construction of the fitness centre with a swimming pool was carried out in violation of the regulations of Ukraine. Hence the construction was suspended, and measures have been taken to reverse the impact of the construction. The Ukraine Government has further initiated a programme to promote scientific research as well as technical and restoration works for the preservation of St.Sophia of Kiev. The Ministry of Ecology and Natural Resources, the National Academy of Sciences and other institutions have initiated a number of research projects, which include the domains of engineering, geology, hydro- and geo-physics as well as monitoring the state of the ground structure and the water table within the affected area.

During a meeting held on 31 January 2003, the Permanent Delegation of Ukraine stated that the President had ordered the construction to be halted within the World Heritage site and requested that UNESCO be informed in a timely fashion of any significant construction or restoration works within the borders of the site. The Centre received furthermore an unofficial translation of the Order by the President of Ukraine to preserve the cultural and natural heritage in Ukraine according to the World Heritage Convention. Preventive measures to avoid illegal construction within protected zones are taken and the elaboration and adoption of a programme on the preservation of the St Sophie Cathedral 2003 to 2010 is underway. On 17 February 2003, however, concerned citizens once again informed the Centre that the previously halted construction work had been resumed. Alarm was also raised about a newly erected restaurant within a national conservation area/defined site boundary of Kyiv Pecherska Lavra Monastery.

1. Expresses its appreciation to the State PartyUkraine authorities for their rapid response to the threats and the programme of action adopted for the property;

2. Acknowledging the progress made with legal protection of the property through a presidential decree,;

1. Thanking the Ukraine authorities for their rapid response to the threats and the programme of actions adopted for the site,

2. Acknowledging the progress made with legal protection of the site through a presidential decree,

3. Expresses, however, its concern for the preservation and conservation of the Cathedral and the Belfry,

4. Requests the State Party to provide a detailed report to the Centre, by 1 February 2004, on the research and on planned or completed projects in the vicinity of the designated World Heritage site, for the consideration at its 28th session. 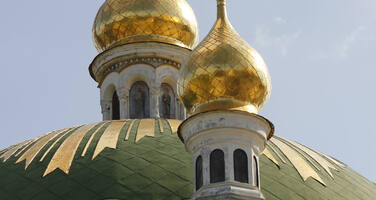