Total amount granted: USD 870,000 for the project “Preservation and Conservation of Tiwanaku and the Akapana Pyramid” (UNESCO/Japan Funds-in-Trust for World Heritage), finalized in 2018

On 2 January 2020, the State Party submitted a state of conservation report (in Spanish only), which is available at http://whc.unesco.org/en/list/567/documents/ and reports the following:

It is welcomed that the State Party is considering ICOMOS’ recommendations regarding the 2017 Management Plan.

The December 2019 ICOMOS Technical Review of the ICP strongly supports the vision that it is essential to approach the property as part of a very extensive archaeological landscape (up to 650 hectares) and to address the conservation of the landscape, architecture, archaeological deposits, and artifacts, both within and outside the property, in an integrated manner. In order to strengthen the ICP, the State Party should be recommended to consider the advice of the Technical Review concerning ongoing archaeological condition assessment, the establishment of a cyclical maintenance programme for the property, and attention required for deposits outside the museum, among others.

It is noted that neither the State Party report nor the ICP address the previous request of the World Heritage Committee to give priority to efforts to guarantee the optimal state of conservation of the identified attributes that convey the property’s OUV prior to pursuing any new archaeological projects. In this sense, the proposal in the ICP to undertake three new excavations as part of a communication strategy to showcase the extension to the archaeological area should be carefully and strategically re-considered.

The preparation of a Risk Management Plan in 2020 is welcomed, and it is recommended that the Committee request the State Party to submit it to the World Heritage Centre for review by the Advisory Bodies as soon as it becomes available.

It should be recalled that, for many years, the World Heritage Committee has been calling upon the State Party to expand the buffer zone of the property and to define the urban and rural zones with their specific regulations. It is of extreme concern that no progress has been made in any of these areas. The existing buffer zone of 100 metres around the three areas that make up the property has proven to be insufficient to prevent inappropriate constructions and intrusions. In addition, an assessment should be undertaken of the implications of the eventual designation of the property and its existing and/or proposed buffer zone as urban or rural zones. It is recommended that the Committee also request the State Party to clarify this as early as possible.

The continued urban expansion of the village of Tiwanaku and the absence of an appropriate buffer zone and regulations could be considered as a potential threat to the property’s OUV. The Committee should therefore urge the State Party to formalize the buffer zone extension and regulations for the urban and rural zones, and to submit a formal minor boundary modification request, as per Paragraph 164 of the Operational Guidelines.

It is welcomed that the CIAAAT collaborates intensively with the local authorities and communities in decision-making processes regarding planning, conservation and management. It is recommended that the Committee encourage the State Party to continue this effort. 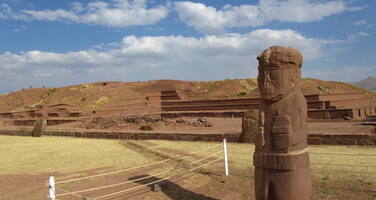