State of Conservation Tombs of Buganda Kings at ... 2021
Print

Total amount granted: USD 2011-2012: 68,365 from the Japanese Funds-in-Trust for an Expert Appraisal Mission; 2013-2016 and 2019-2020: USD 650,000 from the Japanese Funds-in-Trust for the project: Technical and financial assistance for the reconstruction of Muzibu-Azaala-Mpanga, architectural masterpiece of the Tombs of Buganda Kings at Kasubi, Uganda, World Heritage property in Danger. 2017: USD 4,300 from the World Heritage Fund for ICOMOS advisory consultancy for the finalization of the elaboration of the Master Plan; USD 75,000 from Emergency assistance for installation of fire-fighting equipment, USD 30,000 from the Heritage Emergency Fund, USD 100,000 in 2021-2022 through UNESCO/Government of Norway cooperation

On 6 February 2020, the State Party submitted a state of conservation report, which is available at https://whc.unesco.org/en/list/1022/documents/ and reports progress in a number of conservation issues addressed by the Committee at its previous sessions, as follows:

In addition, the State Party informed the World Heritage Centre that a fire at the property on 5 June 2020 destroyed the “Enyumba za Balongo”, one of the three spiritual houses in the courtyard. On 23 June, the State Party submitted a short report of the incidence to the World Heritage Centre, which informed that a detailed report will be shared after the full investigation by the local authorities.

The State Party has actively engaged the World Heritage Centre and the Advisory Bodies in the process of implementing the corrective measures to achieve the DSOCR. These ongoing engagements have been greatly beneficial to the property, as described below.

The reconstruction of the Mazibu-Azaala-Mpanga is reaching its final stages. The State Party should look towards augmenting the surviving collection of power insignia that were recovered from the building following the fire of 2010.

The Master Plan for the property was developed through repeat meetings and submission and review of material. The Master Plan, which has already been adopted by the Kampala Capital City Authority, should now be implemented.

The detailed documentation submitted by the State Party on the Bujjabukala provides a solid basis for decision-making on the restoration of this important building and has informed the detailed architectural drawings submitted. An ICOMOS Technical Review and further discussions between the State Party, the World Heritage Centre and the Advisory Bodies concluded that the State Party should further develop the proposal and submit further details for review.

Elaborating development guidelines for the buffer zone of the property is a complex and expensive task involving many stakeholders and fields of expertise. A crucial aspect that the State Party is already addressing is public engagement. It is recommended that the Committee encourage the State Party to invite the World Heritage Centre and the Advisory Bodies to collaborate in this process, guided by the approach carried by the Recommendation on the Historic Urban Landscape (2011). Final details of infrastructure upgrades, especially transport infrastructure, in the buffer zone of the property remain outstanding. The financial assistance through the UNESCO/Government of Norway cooperation provides timely support to the State Party to tackle this challenge.

The completion of the fire-fighting installation is critical to help safeguard the reconstructed structure and other structures in the property. The fire of 5 May 2020 could be contained and damage limited to one structure. The State Party is working with the local authorities and police to determine the source of the fire. The World Heritage Centre, the UNESCO Regional Office in East Africa and the State Party have developed emergency measures to protect the property from another fire disaster. Following a series of Technical Reviews by ICOMOS, final agreement on the details of the permanent system, except for the location and design of a fire station, was reached with the World Heritage Centre and the Advisory Bodies in January 2021.

The State Party is well on its way to completing the corrective measures and achieving the DSOCR. Some aspects, such as the reinstatement of fences and boundary trees, can be achieved within the short term, but proving that measures are in place to ensure the vitality of the property is sustained through the transfer of knowledge to future generations may take longer. In collaboration with the UNESCO Regional Office for East Africa, the State Party developed a matrix indicating progress made on the implementation of the corrective measures, which was submitted to the World Heritage Centre in April 2018. This matrix should be updated and submitted to the World Heritage Centre, indicating progress made, outstanding issues and a work plan towards achieving the DSOCR.

Decides to retain Tombs of Buganda Kings at Kasubi (Uganda) on the List of World Heritage in Danger.
Read more 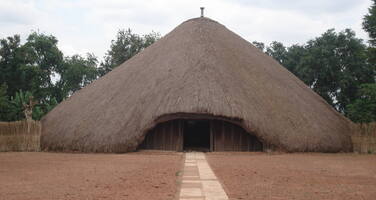