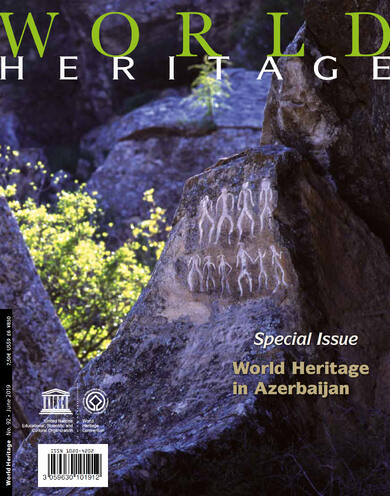 I am particularly pleased that the 43rd session of the World Heritage Committee will be held in Baku, Azerbaijan. We are very grateful to our generous hosts for organizing this session in a World Heritage city.

Baku has always been at the crossroads of cultures. Situated along the western shore of the Caspian Sea, it is part of ancient trade routes from the Central Asian steppe towards Europe, and was the main port to receive goods from the East shipped across the Caspian Sea. Heading westwards from Baku, merchandise would be transported north through the Caucasus Mountains and to the Black Sea and to Istanbul. Baku has thus been an important multicultural hub in the region throughout history. Archaeological evidence from Baku indicates that the city was founded several centuries before the Common Era, and has evolved in this history of economic and cultural exchanges.

Azerbaijan has a longstanding relationship with UNESCO in many aspects of its mandate. In addition to ratifying all six of the Culture Conventions, Azerbaijan has a city in the Creative Cities Network (Sheki, Creative City of Crafts and Folk Art), thirteen elements of Intangible Cultural Heritage — that you will discover in these pages — and two sites under the enhanced protection of the Second Protocol (1999) to the 1954 Hague Convention for the Protection of Cultural Property in the Event of Armed Conflict.

Its annual session provides not only a meeting place for all involved in World Heritage preservation but also guidance for key actions to safeguard heritage in the years to come.

The considerable support of our 193 States Parties and of the many stakeholders involved is what makes our global conservation efforts possible. I would like to thank the Azerbaijani authorities for their warm welcome, and I look forward to a fruitful session.

Special Message from Abulfas Garayev, Minister of Culture of the Republic of Azerbaijan and Chair of the 43rd session of the World Heritage Committee

Special Message from Eldar Azizov, Head of the Executive Power of Baku City

Interview with Abulfas Garayev, Chair of the 43rd session of the World Heritage Committee and Minister of Culture of the Republic of Azerbaijan

Baku today: Towards fusion of history and modernity

The Walled City of Baku: Its Outstanding Universal Value, history and management as a World Heritage site