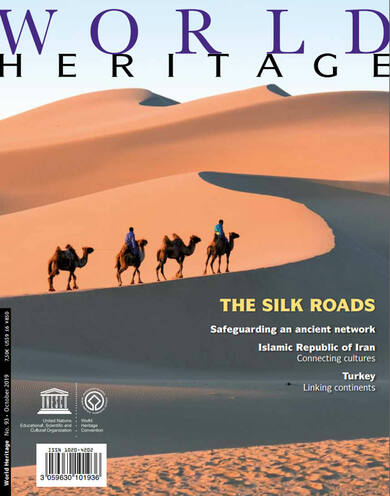 The Silk Roads encompass some of the most complex and fascinating systems in the history of world civilizations. A shifting network of roads and pathways for trade that evolved over centuries, it enabled the exchange of cargo such as silk, spices, gems, furs, but also shared art, religion and technology. It is also one of the first cultural ‘corridors’ to be inscribed on the World Heritage List, embodying the principles of cultural diversity, heritage and peaceful cooperation that are fostered by both UNESCO and the World Heritage Convention.

In 2014, after years of preparation among countries, the property of the Silk Roads: the Routes Network of Chang’an-Tianshan Corridor was inscribed on the World Heritage List. This 5,000 km section of the extensive Silk Roads network is a transnational site crossing China, Kazakhstan and Kyrgyzstan, stretching from Chang’an/Luoyang, the central capital of China in the Han and Tang dynasties, to the Zhetysu region of Central Asia. Thirty-three components are included in the routes network, including capital cities and palace complexes of various empires and Khan kingdoms, trading settlements, Buddhist cave temples, ancient paths, beacon towers, sections of the Great Wall, fortifications and religious buildings.

In this issue, we learn about the complicated process of establishing this extraordinary site, and efforts underway to carry this work further through the South Asian Silk Roads World Heritage nomination project. We examine the particularities of the Silk Roads in Iran and Turkey, and the natural heritage along the way, such as Tajik National Park and the Saryarka-Steppe and Lakes of Northern Kazakhstan.

There is an interview with Doudou Diène, who led UNESCO’s original Silk Roads research project. He shares with us the origins of this groundbreaking project and the significance of carrying forward this work today.

I wish you an absorbing and informative read of this exciting issue.

The Silk Roads were an interconnected web of routes linking the ancient societies of Asia, the Subcontinent, Central Asia, Western Asia and the Near East, stretching to about 7,500 km east to west but covering over 35,000 km along all the many branch routes. The political, social and cultural impacts of these movements had far-reaching consequences for all the societies touched by them.

The Silk Roads in Iran and their unique heritage

The main branch of the Silk Roads enters Iran through the eastern border with Turkmenistan, connecting Merv to Neyshabur, and then goes westward to Rey, now called Tehran. From Tehran, there are two branches: the southern one goes to Iraq and Syria, and the northern one heads northwest to Turkey and Constantinople. The

four focal points in the Iranian part of the Silk Roads are Neyshabur, Tehran (Rey), Hamadan and Tabriz. All of these cities were the capital of Iran in different periods.

As a vital crossroads of many important routes throughout history, Turkey is one of the most critical areas of interaction of the Silk Roads. In this regard, without Turkey, it is not possible to fully understand cultural, social, economic and commercial relations between Asia and Europe on the Silk Roads. The Silk Roads represent a key element of the long history and rich culture of modern Turkey.

Interview with Doudou Diène, Chairman of the Board of Directors of the International Coalition of Sites of Conscience

The Birthplace of Jesus: the Church of the Nativity and the Pilgrimage Route, Bethlehem (Palestine); Humberstone and Santa Laura Saltpeter Works (Chile); Islands and Protected Areas of the Gulf of California (Mexico).