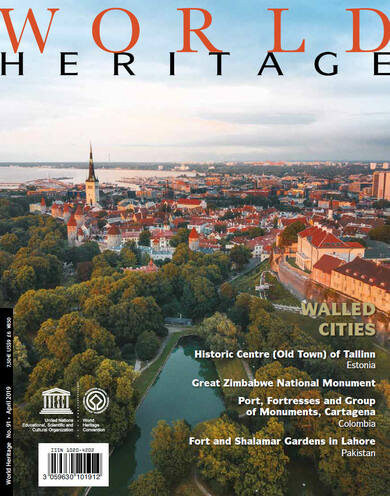 Historic urban walls were once used for division and protection, and remain a legacy of the complex relations between people and their environment. Today, they represent a fascinating aspect of cultural heritage management. They attract visitors and can be considered part of the attempt to balance sustainable social and economic development and the conservation of heritage.

In this issue of World Heritage we will encounter Great Zimbabwe, the legendary capital of the Queen of Sheba and the country’s first cultural site to be inscribed on the World Heritage List, in 1986. Then we look at Cartagena, Colombia, which has the most extensive fortifications in South America, and the marble palaces of Lahore Fort, inscribed along with the Shalamar Gardens in Pakistan. We also learn about the city of Tallinn, Estonia, where particular efforts have been made to protect its medieval structures and fortifications for the enjoyment of local people and tourists.

This issue presents the conclusions of recent conferences dedicated to the implementation of the Historic Urban Landscape Recommendation (HUL), and the specific challenges of applying HUL in World Heritage properties with a significant presence of historic walls, fortifications and fortified urban areas. We also have a look at the efforts of the International Committee for the Preservation of Monuments and Sites (ICOMOS) to protect fortifications and military heritage, focusing not only on historic walls but also on related structures and areas.

In an exclusive interview, Ms Souad Abderrahim, mayor of Tunis, Tunisia discusses the Archaeological Site of Carthage and the Medina of Tunis, and how to protect heritage while enhancing the livelihoods of local communities living there.

Long-term protection can only be achieved if it is integrated within sustainable development policies and programmes. Managed well, historic walls can remain a living part of our urban areas, evolving away from their role of division to contribute to social cohesion and sustainability, and to the gratification of generations to come.

The legacy of walled cities

City walls and their adjacent historic districts serve as unique resources for the development of heritage tourism. They share common ground in cultural and historic evolvement and complement each other for the interests of tourism.

Tallinn, Estonia: A journey through time

The exhibition of the fortifications of different eras as a complex, and the connection of the city wall towers with the bastion passages and the moat, have proved to be successful ideas. The complex provides a unique understanding of the development of fortification systems from the Middle Ages until modern times, and significantly enhances the links between Tallinn’s inhabitants and their heritage.

Cartagena is facing many challenges to ensure conservation and sustainable management, particularly due to the pressures of tourism and accelerated urban development currently experienced by the city.

A new masterplan for the Lahore Fort Precinct and Buffer Zone

Over time, rather than a passive visitation site detached from the public and society at large, the Fort should become, through its operations and its very presence, a creative and active force in the future revitalization of the Walled City of Lahore.

Sites such as Great Zimbabwe will not simply continue to live on their past glory. They will become important vehicles for local community participation in cultural heritage management and for the promotion of societal development.

Both the Siena and Šibenik meetings highlighted a rooted urban tradition in which the city walls play a significant role in the lives of their communities. The commonalities include close ties with the territory, thus with rural land, and the intangible practices and intangible heritage associated with the place.