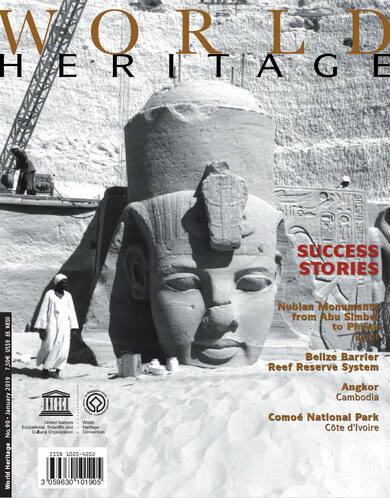 The World Heritage Convention is a legal tool. In adhering to it, countries commit to protect heritage within their borders and to refrain from any deliberate measures that might damage directly or indirectly the cultural and natural heritage of the territory of other States Parties to this Convention.

The true measure of the Convention is the effectiveness of its implementation. It is the concrete results that matter, for the sites and for the people who live in or near them. When there are positive results at one World Heritage property, all countries that are party to the Convention can benefit from this success.

In this issue, we look at specific cases of actions at World Heritage sites that have benefited and improved their state of conservation. We start with Abu Simbel (Egypt) in the 1950s, and how the safeguarding campaign to protect it led to the birth of the World Heritage Convention; and Angkor (Cambodia), which celebrates 25 years of conservation since its inscription on the World Heritage List, with more than 60 projects completed thanks to contributions from more than 20 countries.

Comoé National Park (Côte d’Ivoire), one of the largest protected areas in West Africa, was inscribed on the List of World Heritage in Danger in 2003, following the outbreak of civil conflict in the country. After concerted and coordinated actions of the State Party and its strategic, technical and financial partners, it was finally removed from this List at the 41st session of the Committee in Krakow, Poland in 2017.

The recent victory of the Belize Barrier Reef Reserve System, which after ten years on the List of World Heritage in Danger was finally removed from it, was much celebrated at the 42nd session of the World Heritage Committee in Manama, Bahrain in July 2018. This was made possible by a strong and collaborative effort involving government, civil society and the scientific community, as well as the World Heritage Centre, Advisory Bodies and the Committee with its decision-making power.

Each of these important cases shows that it is only by working together that we can take effective action and gain meaningful results. As Ernesto Ottone R., UNESCO Assistant Director-General for Culture, encourages us to do in our exclusive interview with him, let us all recommit to the original spirit of the World Heritage Convention – not just inscribing sites on the World Heritage List, but protecting them by breaking down barriers and encouraging dialogue among all concerned.

The evolution of conservation

Reinforced commitment is required by all States Parties to their obligations under the 1972 World Heritage Convention, together with new partners, to safeguard the priceless heritage of our planet.

The story of an extraordinary rescue

In 1960, an international appeal to safeguard the Nubian monuments was launched, in a highly innovative approach that considered masterpieces of human creative genius as an integral part of the cultural heritage of humanity, and their preservation a duty incumbent upon all nations.

After almost a decade on the List of World Heritage in Danger, the Belize Barrier Reef Reserve System was finally removed from it at the 42nd session of the World Heritage Committee in Manama, Bahrain in 2018.

Comoé National Park is now a model for success when it comes to implementing remedial measures to remove a natural property from the List of World Heritage in Danger.

The success story of 25 years of conservation

National and international action to safeguard Angkor has been uninterrupted for 25 years. It has an extremely positive track record that makes it a model on a global scale.

UNESCO’s flagship initiative to revive the spirit of Mosul, Iraq

Launched by UNESCO Director-General Audrey Azoulay in February 2018, the ‘Revive the Spirit of Mosul’ initiative focuses on the human dimension in the reconstruction and recovery of the Iraqi city, particularly through culture and education, after years of painful destruction.

Capacity-building as a success story for the World Heritage Convention.