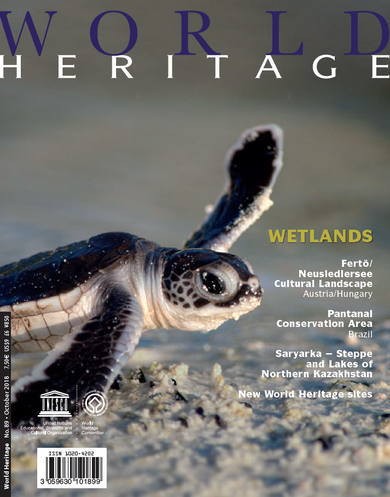 Wetlands are an essential, but often overlooked, aspect of our natural environment. They are vital sources of biodiversity and take many different forms – from lakes, rivers and swamps, to deltas and tidal flats, mangroves and coral reefs. Wetlands are found nearly everywhere, are essential to the survival of countless species of plants and animals, and are therefore crucial for human survival too, as water is the essence of life.

For this issue of World Heritage, we have collaborated with our friends at the Ramsar Convention on Wetlands, which recognizes and helps protect wetland sites of international importance. Over 100 World Heritage properties are also designated as Ramsar Sites, in whole or in part, and our two Conventions work together closely. In an interview, Martha Rojas Urrego, Secretary General of the Ramsar Convention, describes how the two Conventions cooperate, discusses the role of wetlands in urban areas as they continue to grow, and addresses the challenge of preserving wetlands in cultural heritage places.

We focus on Fertö / Neusiedlersee Cultural Landscape (Austria/Hungary), a unique example of people living in harmony with nature and a meeting place of different cultures for eight millennia, and on Pantanal Conservation Area (Brazil), part of one of the largest freshwater wetland ecosystems in the world. We look at Saryarka – Steppe and Lakes of Northern Kazakhstan, with its wetlands of outstanding importance for migratory water birds, including globally threatened species like the Siberian white crane and the Dalmatian Pelican. And we examine the uneasy balance of wetlands and cities, and how, if managed well, they can foster each other.

The continuous monitoring and preservation of World Heritage sites is a monumental task, and it is impossible for UNESCO and the States Parties to do it alone. We are very grateful to combine our efforts with the devotion and expertise of Ramsar and the many other people and organizations we work with, worldwide.

Half a century of collaboration for wetland conservation

Currently, there are more than 130 Ramsar Sites that overlap wholly or partially with more than 90 World Heritage wetlands. One third of these World Heritage properties are recognized for their cultural values.

The Neusiedlersee: a diverse cultural landscape shaped by water management

Lake Neusiedl is characterized by reeds, water and the vineyards in the hills, as well as in the flat plains of the eastern parts of the region. The cultural landscape forms a green heart in the European city triangle of Vienna (Austria), Bratislava (Slovakia) and Győr (Hungary).

The vast and vulnerable Pantanal

Conserving the heart of South America

Brazil, Bolivia and Paraguay signed the Pantanal Declaration in March 2018, calling for the coordinated conservation and sustainable development of the Pantanal. The declaration could breathe new life into

At the crossroads of Central-Asian and Siberian-South-European flyways of migrating birds, the Tengiz- Korgalzhyn Lake System and the Naurzum Lake System are wetlands of international significance and protect a large number of rare and endangered species.

Wetlands and cities: an uneasy balance

Many major cities in the world are wetland cities.

Cities often emerge in places with easy access to water.

Where there is ample water, there are wetlands.

Interview with Martha Rojas Urrego, Secretary General of the Ramsar Convention on Wetlands.

One site removed and one site added to the List of World Heritage in Danger.