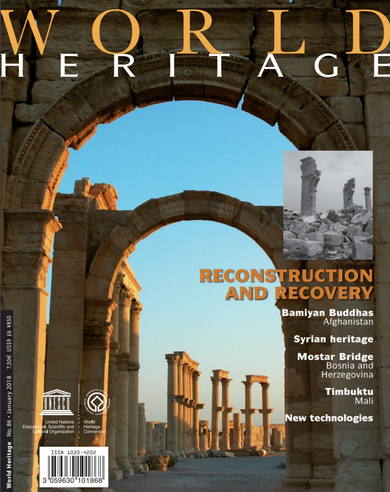 While conflicts continue to inflict damage – much of it intentional – on heritage sites, reconstruction becomes a critical topic for discussion. The recovery, rehabilitation and reconstruction of damaged sites are complex. They involve questions that go beyond authenticity and integrity. As the architect Jad Tabet says in his introductory article to this issue of World Heritage, “No one could have imagined that the coming century would, in its early years, witness a new cycle of violence that would spread from Afghanistan and Iraq to Mali, Libya, Syria and Yemen and lead the world to this state of generalized latent warfare that we know today.”

The formulation of sound guidance is urgently required on issues related to recovery, taking into account the need to support the affected local communities. To this end, expert meetings have been convened by the UNESCO World Heritage Centre, ICCROM and ICOMOS, and seminars are being held at universities to develop plans for thoughtful and effective action.

UNESCO is also currently preparing a ‘White Paper’ in partnership with the World Bank on the reconstruction of cities following a conflict or major natural disaster. Reconstruction projects at World Heritage sites also need to address the Outstanding Universal Value (OUV) of each site – the reason for which it was inscribed on the World Heritage List – but within the context of a larger vision for recovery that addresses socioeconomic questions as well as the needs of the local communities. Solutions must be sensitive to questions of reconciliation and cannot rewrite history.

In this issue, we look at the cases of intentional destruction of sites in Syria and of the Buddhas in the Bamiyan Valley of Afghanistan. We take into account the devastating impact on local communities and their identities, as well as the implications of different approaches to reconstruction. We look at the inspiring cases of Timbuktu (Mali), where the mausoleums were rebuilt after their destruction in 2012, and the Old Bridge Area of the Old City of Mostar (Bosnia and Herzegovina), where the rebuilt bridge has become a symbol of perseverance and unity among communities. We are also pleased to present an interview with heritage expert Christina Cameron, who explains the concept of reconstruction in the framework of the World Heritage Convention and considers the emotional and psychological consequences for the related communities.

As we move forward, the World Heritage Committee will continue to support the preparation and dissemination of guidance on reconstruction, which includes facing the multifaceted challenges it brings. The Committee will continue as well to offer other options – such as exhibits, or virtual projections – that can satisfy the needs of communities to preserve and express their identities without marring the authenticity of what remains. New questions must also be addressed in the future. They include commemoration of the loss, and remembrance of community members and site managers who have given their lives to defend our shared World Heritage.

I would like to take this opportunity to wholeheartedly thank Francesco Bandarin, Assistant Director-General for Culture, who is leaving UNESCO after 15 years of service and who contributed greatly to safeguarding World Heritage around the world. I would also like to express my gratitude to Vesna Vujicic-Lugassy, our Managing Editor from the inception of this magazine in May 1996 to the present, for her personal engagement to make the Review globally known.

World Heritage extends its gratitude to Nada Al Hassan, Chief of the Arab States Unit at the UNESCO World Heritage Centre, for her contribution to the preparation of this issue.

Reconstructing in the age of globalization

The traditional concept of urban heritage, which focuses mainly on the physical, architectural and urban aspects, no longer allows adequate conservation strategies to be implemented. New approaches need to integrate notions of the socio-economic context and sustainable development as well as factors related to social and cultural representations and intangible heritage.

Reconstruction of the Old Bridge in Mostar

The destruction of the Old Bridge in Mostar (Bosnia and Herzegovina), on 9 November 1993, represented the beginning of a new era in the approach to heritage.

Reconstruction of Syrian heritage: Rethinking the past and the future

The postwar reconstruction of the affected historic monuments and sites necessitates enormous preparatory reflections in systematic and theoretically stimulating ways.

The Bamiyan Buddhas: Issues of reconstruction

There has been much debate, both at the national and international levels, about any potential reconstruction of the destroyed Bamiyan Buddha statues (Afghanistan).

Reconstruction of the mausoleums in Timbuktu: The role of local communities

The experience of rebuilding the mausoleums destroyed in Timbuktu (Mali) is a textbook case, in that it placed local ownership at the heart of the process – the crucial and indispensable principle to consider in any project to reconstruct a destroyed World Heritage site, and also to ensure its effective and sustainable conservation after reconstruction.

The reconstruction of a building can have many advantages, provided there is sufficient documentation and human, material and financial resources to embark on such an operation.

New technologies – the future of reconstruction?

The new technologies around 3D modelling and printing are increasingly hailed for their potential in preserving, if not the actual cultural sites, monuments and objects affected by armed conflicts and natural disasters, at least their memory for the benefit of present and future generations.

Interview with Christina Cameron, Professor and Chairholder of the Canada Research

How ICOMOS fuels discussion on reconstruction as a dynamic process.

Experts’ meeting in Aleppo; Restoration completed on Lion of Al-lāt statue from ancient city of Palmyra, damaged by ISIS.