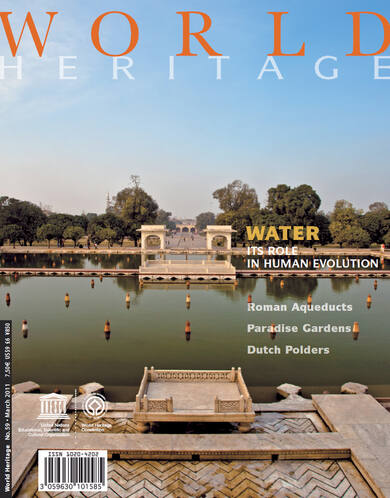 This display of human creativity and ingenuity reveals the brilliance of our common heritage and the potential for future technological advances. By gaining a deeper knowledge of the principles by which societies have managed water resources, we can better discern the optimal strategies for dealing with water scarcity. Issue No. 59 of World Heritage takes a closer look at humanity’s interaction with water over time.

China's World Heritage and water
Water is the foundation of the oldest civilizations, like that of China, which has many World Heritage sites related to water.

Beemster Polder: turning water into land
The Droogmakerij de Beemster (Beemster Polder) offers a great example of the reclamation of land from the sea.

The Persian paradise garden: its South Asian continuity
Thanks to their sophisticated engineering, luxurious artistic design and verdant, flowering abundance, Persian water gardens are appropriately viewed as representations of paradise on Earth.

Gough and Henderson: treasure islands in danger
Gough and Henderson are sanctuaries of biodiversity, but they are also experiencing severe problems relating to invasive species, and their remoteness makes it difficult to put measures in place.

Niger-Loire: glances exchanged on a common resource
The Niger-Loire project supports the development of the communities along the Niger River in Mali through the identification, recognition and valorization of cultural resources and related natural values.

In Danger
DRC recommits to the protection of its sites in danger; Renovation in the Old City of Jerusalem; Operational activities in Afghanistan; Two rhinos translocated to Manas Wildlife Sanctuary.