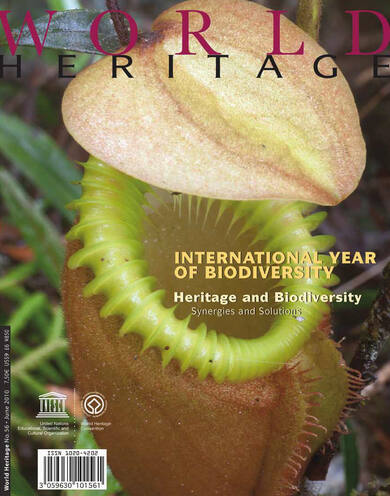 There was a time when the world appeared boundless and inexhaustible. We are just beginning to realize that it is both limited and surprisingly vulnerable. It follows that if we are to survive at all as a species, we shall have to learn to see the world in a different light. Warnings have been sounded. Irina Bokova, Director-General of UNESCO, opened the international Biodiversity Science Policy Conference held at UNESCO Headquarters earlier this year by underlining that preserving biological diversity represents ‘as big a global challenge as climate change’.

We already know that our planetary sweet water supply is threatened by pollution, but also by climate change, since even the colossal glaciers of the Himalayas, which feed the major rivers of Asia and provide water to billions in China, India and South-East Asia, have begun to shrink at an alarming rate.

Our great forests are threatened, too, both by greed and by the simple survival needs of a growing population. And while all this looks stark, frameworks do exist through which to address the threat and begin the work. One of these is the World Heritage Convention.

In its thirty-eight years of existence, the World Heritage Convention has developed a worldwide network of 890 sites, which may be regarded as so many carefully watched monitors that centralize observations touching upon climate, biodiversity, threatened species and kindred issues. Nor is the World Heritage Convention working at this alone. It is doing so in close coordination with such other great organizations and networks as the Convention on Biological Diversity, Conservation International, International Union for the Conservation of Nature and Natural Resources, United Nations Environment Programme – World Conservation Monitoring Centre, World Bank, NatureServe, Ramsar Convention on Wetlands, International Treaty on Plant Genetic Resources for Food and Agriculture, Convention on the Conservation of Migratory Species of Wild Animals and many others.

This issue of World Heritage, published on the occasion of the United Nations International Year of Biodiversity (2010) highlights the work done by these remarkable organizations, both on their own and in cooperation with the World Heritage Centre to address these burning issues.