World Heritage in the Gulf Region 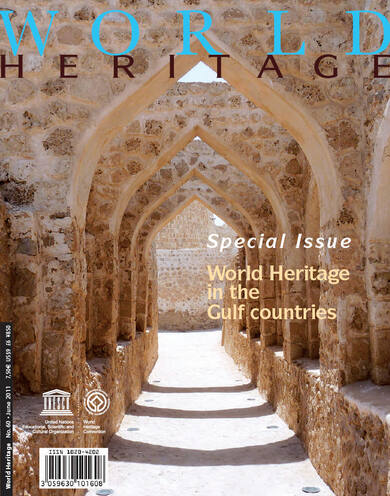 This special issue is devoted entirely to World Heritage sites belonging to members of the Cooperation Council for the Arab States of the Gulf. It thus offers a unique opportunity to discover the rich cultural and natural heritage of a region that embraces Bahrain, Oman and Saudi Arabia (all three of which already have sites inscribed on the World Heritage List), as well as Qatar and the United Arab Emirates, both of which will be submitting sites for inscription at upcoming Committee meetings.

The articles in this issue deal with all the sites and countries in the Gulf region. One is thus devoted to the site of Qal’at al-Bahrain (Bahrain Fort), a tell capped with a fort last developed by the Portuguese, not far from the kingdom’s capital where archaeological research has uncovered vestiges of a civilization contemporary to the Sumerian.

Exceptionally arid climate conditions have favoured the development in the region of a unique system of water management, the falaj (plural, aflaj) consisting of tall subterranean galleries dug to convey spring water, sometimes over long distances, to sites in need of irrigation. Aflaj are found throughout the Middle East, but they have been somewhat neglected over recent decades, and we should hail the initiative of Oman, which has listed a number of exemplary aflaj found on its territory.

Three more important sites in Oman have been inscribed on the World Heritage List: Bahla Fort, the protohistoric site of Bat (the world’s most complete collection of settlements and necropolises from the third millennium BC) and the Frankincense Trail. And finally in Saudi Arabia in 2008, the remarkable Nabataean city of Al-Hijr (formerly known as Hegra, a sister site to Jordan’s Petra) was inscribed on the World Heritage List, as was ad- Dir’iyah, the striking 15th-century capital of the Saudi dynasty, in 2010. All these inscriptions and others currently in the pipeline attest to the intent of these countries to track, acknowledge and assert their historic presence and ongoing influence within the planetary fabric of culture, trade and development that the World Heritage process set out to inventory and celebrate nearly forty years ago.

Map of World Heritage sites in the Gulf Region

Bahla Fort – vestiges of an immense medieval fortress
Bahla Fort was built in the 13th and 14th centuries, when the oasis of Bahla was prosperous under the control of the Banu Nebhan tribe.

Protohistoric sites in Oman –Bat, Al-Khutm and Al-Ayn
The protohistoric site of Bat lies near a palm grove in the interior of the Sultanate of Oman. Together with the neighbouring sites, it forms the most complete collection of settlements and necropolises from the 3rd millennium BC in the world.

Frankincense – the wealth of Oman
The frankincense trees and the remains of the caravan oasis vividly illustrate the trade in frankincense that flourished in this region for many centuries.

Traditional subterranean irrigation systems of Oman
Aflaj are the main source of irrigation water in Oman. They have been utilized in agriculture as well as domestically since ancient times.

Al-Hijr – a Nabataean settlement in Saudi Arabia
The Archaeological Site of Al-Hijr (Madâin Sâlih) is the largest conserved site of the civilization of the Nabataeans south of Petra in Jordan.

Ad-Dir’iyah – cradle of the House of Saud
This property was the first capital of the Saudi dynasty, in the heart of the Arabian Penisula, north-west of Riyadh. Founded in the 15th century, it is a unique example of the Najdi architectural and decorative style.
Tentative Lists – Looking to the future