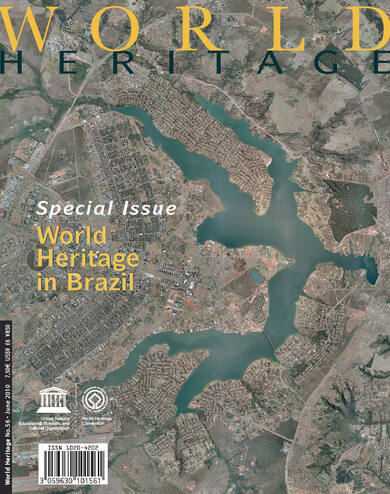 Initially protected by the broadest expanses of virtually impenetrable tropical rainforest on Earth, Brazil still takes prides in a stunning variety of species found nowhere else. With giant snakes such as the anaconda, minuscule hummingbirds, iridescent blue butterflies, voracious piranhas, the fauna of Brazil seems to haunt the imagination of humanity quite as much as it does the vast and climatically varied territories on which it survives to this day.

When the colonizers first reached these shores, the new world unfolding before them appeared boundless. They came in search of rare woods, minerals and precious stones, and they set to work with a will. The ravaged landscapes of the Northeast, the lateritized hills of Minas Gerais and other regions, are testimony to the energy they deployed.

So too, are the seven splendid cities, built between the 16th and 20th centuries – Ouro Preto, Olinda, Salvador, São Luís, Diamantina, Goiás and the country’s new capital, Brasilia, constructed at the very heart of the territory in three short years, as a unique summa of the modernist style – that were listed as World Heritage between 1982 and 2001. Seven natural sites attest to the fact that Brazil has become keenly aware of the frailty of the natural assets that had been ravaged at a time when nature itself seemed inexhaustible and utterly immortal.

Brazil, today, is among the leaders of the drive to conservation and Jaú National Park, in the state of Amazonas, with its 2.4 million hectares, is the largest natural park in the world. Other parks, including Iguaçu, Discovery Coast, Atlantic Forest, Pantanal, Chapada dos Veadeiros and the archipelago of Fernando de Noronha, preserve both spectacular landscapes and precious and threatened biomes.

Two further cultural sites stand apart as utterly unique. One of them, São Miguel das Missões, remains as testimony to the grandiose and utopian venture undertaken by the Jesuits in Guarani territory in the 17th century and wilfully destroyed by the slave-driven economy of the 18th century. The brief renaissance and enduring tragedy of the Guarani are immortalized in the ruins of these missions which have now been carefully enshrined as World Heritage. The other site proclaims the rare courage and unique genius of Antônio Francisco Lisboa, known as Aleijadinho, who was the master builder of the early 19th-century Sanctuary of Bom Jesus de Matosinhos, in Congonhas, in the state of Minas Gerais. His powerful, expressionistic soapstone sculptures of the Twelve Prophets still line the double terraced flight of steps leading up to the shrine.

As a signatory to the Convention concerning the Protection of the World Cultural and Natural Heritage, Brazil spares no efforts to preserve for future generations this wealth of natural diversity. A commitment that, after all, is renewed every day, combining efforts to protect Brazil’s natural and cultural heritage along with sustainable development. This special issue, published on the occasion of the 34th session of the World Heritage Committee in Brasilia in July 2010, honours the splendid efforts made by Brazil to acknowledge and preserve the full range and wealth of its natural and cultural heritage.

Interview with the Brazilian Minister of Culture, Juca Ferreira.

Where to buy it
UNESCO Publishing
Issue
57