For 2,000 years, the high rice fields of the Ifugao have followed the contours of the mountains. The fruit of knowledge handed down from one generation to the next, and the expression of sacred traditions and a delicate social balance, they have helped to create a landscape of great beauty that expresses the harmony between humankind and the environment. 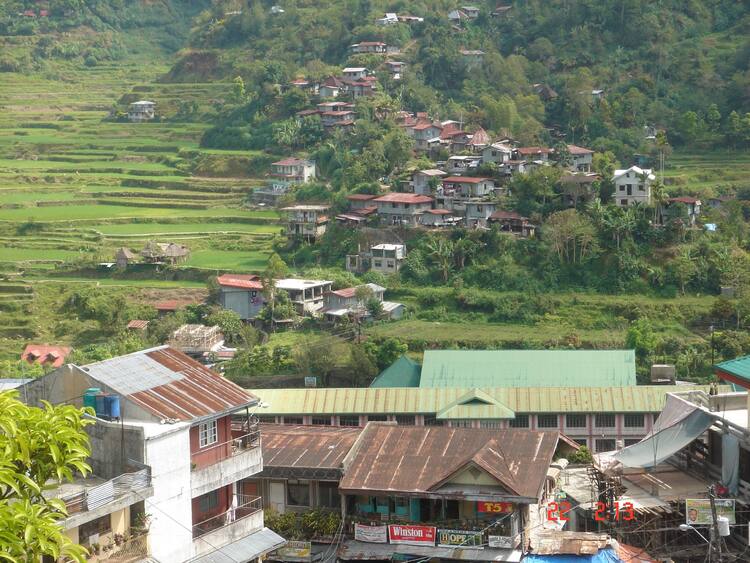 The Rice Terraces of the Philippine Cordilleras is an outstanding example of an evolved, living cultural landscape that can be traced as far back as two millennia ago in the pre-colonial Philippines. The terraces are located in the remote areas of the Philippine Cordillera mountain range on the northern island of Luzon, Philippine archipelago. While the historic terraces cover an extensive area, the inscribed property consists of five clusters of the most intact and impressive terraces, located in four municipalities.  They are all the product of the Ifugao ethnic group, a minority community that has occupied these mountains for thousands of years.

The Ifugao Rice Terraces epitomize the absolute blending of the physical, socio-cultural, economic, religious, and political environment.  Indeed, it is a living cultural landscape of unparalleled beauty.

Reaching a higher altitude and being built on steeper slopes than many other terraces, the Ifugao complex of stone or mud walls and the careful carving of the natural contours of hills and mountains to make terraced pond fields, coupled with the development of intricate irrigation systems, harvesting water from the forests of the mountain tops, and an elaborate farming system, reflect a mastery of engineering that is appreciated to the present.

The terraces illustrate a persistence of cultural traditions and remarkable continuity and endurance, since archaeological evidence reveals that this technique has been in use in the region for 2000 years virtually unchanged. They offer many lessons for application in similar environments elsewhere.

The maintenance of the living rice terraces reflects a primarily cooperative approach of the whole community which is based on detailed knowledge of the rich diversity of biological resources existing in the Ifugao agro-ecosystem, a finely tuned annual system respecting lunar cycles, zoning and planning, extensive soil conservation, mastery of a most complex pest control regime based on the processing of a variety of herbs, accompanied by religious rituals.

Criterion (iii): The rice terraces are a dramatic testimony to a community's sustainable and primarily communal  system of rice production, based on harvesting water from the forest clad mountain tops and creating stone terraces and ponds, a system that has survived for two millennia.

Criterion (iv): The rice terraces are a memorial to the history and labour of more than a thousand generations of small-scale farmers who, working together as a community, have created a landscape based on a delicate and sustainable use of natural resources.

Criterion (v): The rice terraces are an outstanding example of land-use that resulted from a harmonious interaction between people and its environment which has produced a steep terraced landscape of great aesthetic beauty, now vulnerable to social and economic changes.

While maps of the property are yet to be prepared and boundaries to be delineated, all important attributes of the rice terraces comprising the rice terrace paddies, the traditional villages and the forests that are its watershed are present in the five inscribed clusters. Although traditionally defined boundaries for the terraces with the buffer zone of private forests have provided some level of protection, the definition of precise limits of the protected areas and the preparation and implementation of Community-Based Land Use and Zoning Plans (CBLUZP) is critical to ensure that the conditions of integrity are maintained.

The inscribed terrace clusters continue to be worked and maintained in the traditional manner although other nearby terraces have been abandoned or have temporarily fallen out of use due to changes in climate and rainfall patterns in the terraces’ mountain watershed. In some villages, Christianization in the 1950s affected the performance of tribal practices and rituals that were essential in maintaining the human commitment that balances nature and man in the landscape; today, tribal practices coexist with Christianity. However, the terraced landscape is highly vulnerable because the social equilibrium that existed in the rice terraces for the past two millennia has become profoundly threatened by technological and evolutionary changes. Rural-to-urban migration processes limit the necessary agricultural workforce to maintain the extensive area of terraces and climate change has recently impinged on the property resulting in streams drying out, while massive earthquakes have altered locations of water sources and caused terrace dams to move and water distribution systems re-routed.

These factors pose significant challenges that could be addressed through the sustained implementation of conservation and management actions.

The Rice Terraces of the Philippine Cordilleras are authentic in form, character, and function as a direct result of the 2000 year-old and continuously maintained regime that balances climatic, geographical, ecological, agronomic, ethnographic, religious, social, economic, political and other factors.  Through ritual practices, chants and symbols which emphasize ecological balance, the Ifugao community has maintained the intactness of the terraces’ traditional management system over this long period of time, ensuring the authenticity of both the original landscape engineering and the traditional wet-rice agriculture. Once this balance is disturbed the whole system begins to collapse, but so long as they all operate together harmoniously, as they have over two millennia, the authenticity is total.

Being a living cultural landscape, evolutionary changes continuously fine-tune and adapt the cultural response of the terraces’ owners and inhabitants in response to changing climatic, social, political and economic conditions. However, the fact that the Ifugao community continues to occupy, use and maintain their ancestral lands in the age-old traditional manner ensures appreciation and awareness of the enduring value of these traditional practices which continue to sustain them.

Nevertheless the reduction in the workforce and other social and environmental factors, including changes in management of the watershed forests, makes this traditional system and thus the overall balance highly vulnerable and requires sustained management and conservation.

The Rice Terraces of the Philippine Cordilleras were declared National Treasures in Presidential Decrees 260:1973 and 1505:1978. The terraces are likewise protected by the Republic Act No 10066:2010, providing for the protection and conservation of the National Cultural Heritage.

The terraces have long been protected and managed through traditional ancestral land use management traditions of the indigenous Ifugao community. Individual terraces are privately owned and protected through ancestral rights, tribal laws and traditional practices. The maintenance of the living rice terraces reflects a primarily cooperative approach of the whole community which is based on detailed knowledge of the rich diversity of biological resources existing in the Ifugao agro-ecosystem, a finely tuned annual system respecting lunar cycles, zoning and planning, extensive soil conservation, and the mastery of a most complex pest control regime based on the processing of a variety of herbs, accompanied by religious rituals.

Past attempts to conserve the terrace economies have been made sporadically, focused on singular attempts which had very little positive impact. However, on-going government efforts aimed at improving the economic conditions of the people through its various socio-economic programs are hopeful and encouraging.

Threats and concerns identified when the property was put in the List of World Heritage in Danger in 2001 are now being conscientiously and systematically addressed through efforts extended by the Provincial Government and the concerned national agencies. This will ensure completion of the corrective measures that constitute removal of the property from the List of World Heritage in Danger. Programs have been established to ensure landscape restoration and conservation through the documentation and continuous physical rehabilitation of deteriorated areas, including the revival of traditional practices that addresses cultural degeneration.

As conservation and management challenges continue to persist in the rice terraces being a living cultural landscape, sustained efforts shall have to be carried out by the government and the concerned national agencies to ensure its long term sustainability and conservation. This will include the enactment of national government policies and laws for the preservation of natural resources, the adoption of guidelines for conservation and for procedures for Environmental Impact Assessments and infrastructure for the implementation of major projects. Management agencies at the provincial and municipal levels should be functional with adequate resources, and coordinate work with the rice terraces owners’ organizations.

Pride of place and culture, including the long term commitment of its indigenous Ifugao stakeholders shall ensure the sustainability and conservation of this living cultural landscape over time.