The property features an intertidal mudflat system considered to be the largest in the world. These mudflats, as well as marshes and shoals, are exceptionally productive and serve as growth areas for many species of fish and crustaceans. The intertidal areas of the Yellow Sea/Gulf of Bohai are of global importance for the gathering of many migratory bird species that use the East Asian-Australasian flyway. Large gatherings of birds, including some of the world's most endangered species, depend on the coastline as a stopover to moult, rest, winter or nest. 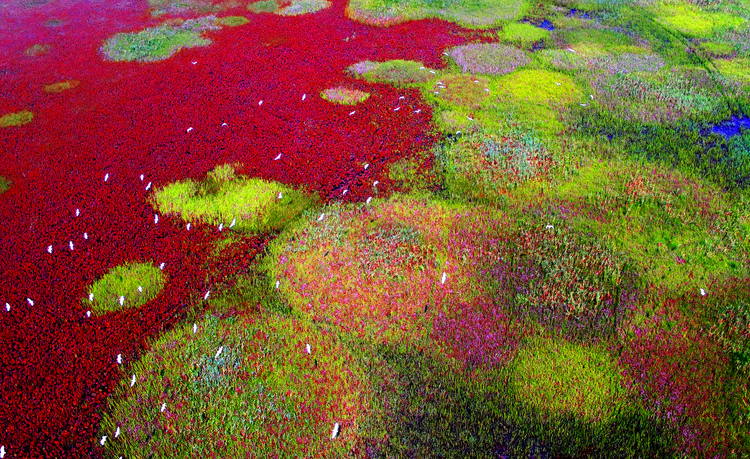 The Migratory Bird Sanctuaries along the Coast of the Yellow Sea-Bohai Gulf of China (Phase I) is situated in the largest intertidal mudflat system in the world and protects globally significant biological diversity. The serial property is an irreplaceable and indispensable hub for over 400 birds species, and critical for the over 50 million migratory birds moving along the East Asian-Australasian Flyway, which spans some 22 countries across two hemispheres from the Arctic to South-East Asia and Australasia. The global importance of the wider coastal area is further evidenced by several Ramsar sites, some of which fully or partially overlap with the property. The property is a promising beginning to identify, conserve and manage the most meaningful representations of a larger, globally significant, yet highly vulnerable, natural heritage system.

The two component parts of the property are both located on the coast of the Yellow Sea in Jiangsu Province. Jointly, the Migratory Bird Habitat in the South of Yancheng, Jiangsu and the Migratory Bird Habitat in the North of Yancheng have a total area of 188,643 ha, along with two separate buffer zones totalling some 80,056 ha. The property’s two component parts are about 30 km apart, separated by the Dafeng Port, and represent Phase I of a much larger serial site nomination.

Criterion (x): The property supports some 680 species of vertebrates, including 415 species of birds, 26 species of mammals, 9 species of amphibians, 14 species of reptiles, 216 species of fish, as well as 165 species of zoobenthos. Large aggregations of birds depend on the coast as stop-over, moulting, staging, wintering, foraging and/or breeding grounds. The property’s tidal flats are of exceptional importance for the conservation of the world’s migratory birds, supporting globally significant numbers, including rare and threatened species. The Phase I tidal flats offer critically important seasonal habitats for more than 10% of the East Asian-Australasian Flyway populations, including two of the world’s rarest migratory birds – the Spoon-billed Sandpiper and Nordmann’s Greenshank. These remaining natural habitats are vital for the very survival of these birds and a wide array of other threatened species including the Black-faced Spoonbill, Oriental Stork, Red-crowned Crane and Great Knot.

The property makes a significant contribution to the viability of the East Asian-Australasian Flyway, one of the world’s most important flyways and arguably the most at risk and fragile. The two component parts of the property include clear boundaries for adequate protection of birds when they are on-site. It is, however, important to understand that the birds depend on wider coastal habitats such as reed beds and groves and hence protection and restoration efforts in these areas are equally important. The property comprises large tracts of mudflats, beaches and other key stopover habitats for migrating birds. The intertidal mudflats, marshes and shallow waters are exceptionally productive and provide spawning and nursery habitat for many fish and crustacean species. In particular, the intertidal mudflats attract a high diversity and enormous number of resident and migratory birds. The main body of the marine deposition plain and mudflat was formed before 1855, when the Yellow River changed its course. This intertidal mudflat is still mainly in the process of accumulation owing to marine hydrological processes, which have shaped the crucial habitat for migratory birds. Large rivers (including the Yellow River, Yangtze River, Yalu River, Liao River, Luan River and Hai River) provide the crucial underpinnings of this system as they continuously discharge sediments into the Yellow Sea and Bohai Gulf, accumulating to form a series of different habitat types all critical for various migratory birds.

The entire coastline lies within a densely populated and intensively used part of China that has been subject to very substantial anthropogenic modification and impact over a long period. While human activity has transformed vast tracts of the coast and tidal wetlands, encouraging policies (that promote a more ecologically sustainable society) are emerging to halt the transformation of the remaining natural areas and to even reverse trends by restoring key migratory bird habitats. To add complexity, however, many of the underlying factors of change, such as pollution, marine traffic, the modification of major rivers and their sediment loads, wind energy and infrastructure on land and in the sea, stem from outside the property including the coast and near-shore waters.

The two component parts are both state-owned and fully protected by law. “Ecological Red Lines”, designated by the Government of China, identify the natural coastline proposed for retention within the overall system. Resource use and access in the coastal areas is severely restricted. The two component parts have the protection status of National Nature Reserves with the exception of the Tiaozini area. Some fishing and harvesting rights are allocated to local resource users in shallow nearshore waters, including mudflats. All public facilities and infrastructure are state owned and the control of natural resources is publicly administered. National and provincial laws and regulations protecting the property include: the Constitution of the People's Republic of China, Environmental Protection Law, Forest Law, Marine Environment Protection Law, the Regulations on Nature Reserves and the Regulations of Jiangsu Province on Wetland Protection and Tourism. The Tiaozini area is protected by the provincial wetland conservation regulation of 2013 and its previous National Nature Reserve status should be reinstated to fulfil the commitment to its protection made at inscription.

Most tourism use is physically separated from the protected areas and limited to visitor centres. Future planning and management for each of the component parts of the property needs to ensure that there are no unacceptable negative effects of development on biodiversity and threatened species, including any negative effects of tourism (which should be appropriately scaled and low impact), wind turbines, pollution (including noise pollution), land reclamation, and infrastructure development. Specific strategies are required to be implemented to ensure conservation of areas above the tidal areas and to restore degraded wider systems that are important to support the core habitat within the property.

In light of the enormous past transformation of, and profound impacts on the coastal and intertidal ecosystems and ongoing high pressures and threats, it is clear that a more ambitious spatial approach is required if the property is to remain viable in the longer term. It is thus critical to follow-through on commitments by the State Party to extend the property as Phase II by adding key areas along the Chinese part of the Yellow Sea and Bohai Gulf. At the national level, there is a clear and needed commitment to consolidate the serial property by adding suitable component parts along the coastline of the Yellow Sea and the Bohai Gulf.

Spanning beyond China’s borders, the intertidal wetlands of the Yellow Sea-Bohai Gulf support crucial habitats for birds migrating along the East Asian-Australasian Flyway. Beyond the national level, there is further and related World Heritage potential, which deserves to be considered as the involved countries intensify efforts towards a harmonized conservation and management strategy of the most valuable regional stepping stones of the East Asian-Australasian Flyway. Effective conservation and management of the East Asian-Australasian Flyway will require international cooperation involving all the States Parties along the flyway. The initial efforts of the three States Parties in the central hub of the flyway are encouraging and should be continued and expanded, including under the World Heritage Convention and other international initiatives.