Factors identified at the time of inscription of the property:

On 19 June 2017, at the request of the World Heritage Centre, the State Party submitted a progress report outlining actions undertaken to meet the recommendations made by the Committee at the time of inscription of the property, in Decision 35 COM 8B.25 (UNESCO, 2011). The State Party reported the implementation of:

ICOMOS assessed this report in May 2018, and its technical review concluded that:

On 15 March 2019, the State Party submitted a follow-up report in response to a World Heritage Centre request, which is available at https://whc.unesco.org/en/list/1334/documents/ and provides the following information:

The State Party’s actions to implement the recommendations made by the World Heritage Committee in Decision 35 COM 8B.25 are welcomed.

At the time of inscription, the local authority acknowledged that the construction of the 7-storey Shangri-La Hotel in 1961 had a considerable negative impact on the sublime views of the forested hills from certain parts of West Lake.

The State Party has now provided full details of the impact analysis undertaken of the hotel from seven viewpoints around the West Lake, and of three options to reduce its visual impact, the most extreme being the removal of two stories, which was considered the most beneficial.

Following the expiration of the hotel lease in October 2018, the demolition of the elevator room and two top floors of the east pavilion of the Shangri-La Hotel was undertaken in March 2019. The reduction in height, combined with proposals to paint the building a colour that would blend with its surroundings, has mitigated the negative visual impact of this building on certain key views from West Lake, as is demonstrated by the before and after images provided. Although some negative visual impact remains, as the buildings are still partially visible from four viewpoints (Gushan North viewpoint, Crane-releasing Pavilion viewpoint, Bai Causeway on the lake viewpoint and Jindai Bridge viewpoint), the State Party proposes to mitigate these remaining impacts by planting large trees on the plaza near the east side of the building and in the sloping fields on the south side of the building. The commitment of the local authority to follow through this major transformation is to be commended.

The report also provides a clear rationale for the identification of important viewpoints, their monitoring, and their relation with development proposals. This ensures that the skyline and the lines of the intermediate hills, around the West Lake and outside the urban zone, are strictly protected.

At the time of inscription, the challenges of controlling urban development pressure were noted, as was the potential negative impact of visitor pressure. The Committee recommended that the State Party ensure that protection is adequately applied, so that incremental change does not impact the overall harmony of the landscape. In particular, it highlighted the need to ensure that there is no encroachment of the city behind hills that are visible from the lake, that all relevant development is subject to Heritage Impact Assessments, which take into consideration the impact on the attributes of OUV, and that visitor management arrangements are strengthened.

As it is essential that Hangzhou City does not spread to meet the slopes of the hills that frame views of West Lake from the causeway, the Committee may wish to reiterate its recommendations and add that management of the urban setting of the property should reflect the 2011 UNESCO Recommendation on the Historic Urban Landscape. Finally, as highlighted in the 2018 ICOMOS technical review, it is important that the State Party include the monitoring of the impact of visitors in the management framework for the property. 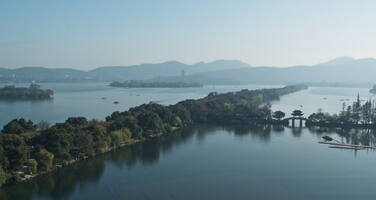