In recent years, particularly 2018 and 2019, the World Heritage Centre received various third party information raising concerns about development proposals in the vicinity of the property and their potential threats to its Outstanding Universal Value (OUV), particularly the construction of the Western Sydney Airport, the Bylong Coal project, the proposal to raise the Warragamba Dam wall and a high-speed transit tunnel.

On 20 December 2018, the State Party responded to letters from the World Heritage Centre and, on 11 April 2019, submitted a report on the state of conservation of the property, available at http://whc.unesco.org/en/list/917/documents/, which provides the following information:

Regarding a high-speed transit tunnel project, the State Party provided information to the World Heritage Centre on 15 January 2019 that it was not aware of any serious discussions on the matter and has not received a referral for this proposal under the EPBC Act. The State Party will therefore inform the Committee of any action that may significantly impact the OUV of the property, in accordance with Paragraph 172 of the Operational Guidelines.

The confirmation provided by the State Party that the EIS for the proposal to raise the Warragamba Dam wall will fully assess all potential impacts on the property’s OUV and its other values, including Aboriginal cultural heritage, is welcomed. However, it is noted with concern that both the State Party and the information received by the World Heritage Centre from different third party sources confirm that the raising of the wall will result in the increase of the frequency and extent of temporary inundation in the property. Such inundation of any areas within the property is likely to impact on its OUV. It is therefore recommended that the Committee request the State Party to ensure that, in line with its commitment, all potential impacts on the OUV are assessed in detail by the EIS, which will be submitted to the World Heritage Centre for review by IUCN, prior to taking any final decisions regarding the project. The Committee may also wish to recall Decision 40 COM 7, para.17, in which it considered that the construction of dams with large reservoirs within the boundaries of World Heritage properties is incompatible with their World Heritage status, and urged States Parties to “ensure that the impacts from dams that could affect properties located upstream or downstream within the same river basin are rigorously assessed in order to avoid impacts on the Outstanding Universal Value”.

While the State Party’s confirmation that no mining occurs within the property and that all mining projects in its vicinity have been or are being assessed for potential impacts on the property is noted, it is of concern that several mining projects exist in the vicinity of the property and that some mining activities have resulted in impacts on the property, as evidenced by the incident at the Clarence Colliery. While the confirmation that no long-term impacts on the property from the incident are expected is noted, it needs to be stressed that, for some projects mentioned in the information submitted by the State Party, such as the Airly Mine Extension Project, potential risks to the OUV have been identified, and the approvals for these projects included conditions that have to be fulfilled in order to minimize risks, such as implementation of a site water management system. It is recommended that the Committee reiterate its position that mineral exploration or exploitation is incompatible with World Heritage status, which is supported by the International Council of Mining and Metals (ICMM) Position Statement of not undertaking such activities within World Heritage properties.

For the South Bates Extension project, the report states that, since the property is not inscribed for its geological values, potential cliff instability resulting from the mining activities would not affect its OUV. However, it should be recalled that the Statement of OUV of the property specifically notes the importance of the geology and geomorphology for providing the physical conditions that support its biological values recognized under criteria (ix) and (x). While some mines were in existence near the property at the time of inscription, it will be important to consider whether the number of mining projects and activities in the vicinity of (or even adjacent to) the property might cumulatively result in any significant impact on its OUV. It should be recalled that this property does not have a formal Buffer Zone, increasing its vulnerability to edge effects. It is therefore recommended that the Committee request the State Party to undertake an assessment of potential cumulative impacts of existing and planned mining projects in the vicinity of the property.

The information provided by the State Party regarding the Western Sydney Airport is noted, and it is recommended that the Committee request the State Party to submit to the World Heritage Centre a copy of the EIS detailing the anticipated airspace and flight path operations, once available, for review by IUCN.

Finally, it is recommended that the Committee request the State Party to ensure that potential threats to the property from activities outside its boundaries, particularly mining, are fully considered in the development of the Strategic Management Framework. 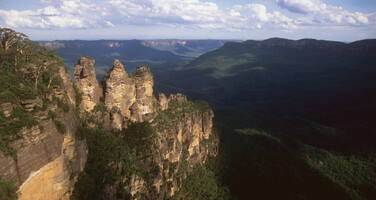