Total amount provided: USD 120,000 for the preparation of a nomination file and the management plan for Nan Madol by the UNESCO/Japan Funds-in-Trust. USD 26,232 for Technical Support to Nan Madol, Micronesia (Danger list) by the Netherlands Funds-in-Trust

On 5 February 2019, the State Party submitted a report on the state of conservation, which is available at the abovementioned web address, and describes the steps taken to implement the Decisions of the Committee and the recommendations of the 2018 mission, as follows:

The report also describes progress in relation to responses to the phased programme recommended by the 2018 Reactive Monitoring mission, with funding from the US Ambassadors’ Fund for Heritage Conservation for a LiDar (“light detection and ranging”) survey of the property and the island of Temwen (in the buffer zone), and for the construction of sea wall reinforcements, ongoing maintenance, the improvement of walkways, opening of additional culverts, silt fencing, and clearing in highlands to prevent sedimentation from entering Madolenihmw Bay. The work will be carried out under the direction of the Pohnpei Historic Preservation Officer and the FSM Historic Preservation Division.

The World Heritage Centre has been informed through third party information of the construction of a resort hotel on an island situated in the buffer zone of the property. Clarifications were requested from the State Party on this matter on 21 February 2019. At the time of writing this report, no response had been received yet.

The state of conservation of the property is poor and deterioration processes are ongoing. Severe invasive plant and tree growth is causing movement, displacement and collapse of structures. Siltation of channels between the islets has rendered most of them dysfunctional, further accelerating invasive growth. Wave action, forecast to increase in severity due to climate change, is causing washout and is undermining the monumental retaining walls in exposed seafront areas, adding to the impact of damage by vegetation.

The 2018 Reactive Monitoring mission report advised that tackling the property as a whole is impossible and impractical, and that the maintenance required would be virtually impossible. A staged recovery programme is proposed which encompasses short-term, medium-term and long-term actions to rehabilitate key parts of the property. The report advocated achievable goals as the first phase of the multi-phase project for areas where intervention is needed and maintenance is feasible. There has been significant progress in undertaking the suggested short-term phase of the works in 2018.

The mission also considered that, before corrective measures could be defined, there needs to be a much clearer idea of how the conservation of the property will move forward with the augmented resources available to reverse the danger arising from a lack of conservation and ongoing management that the property now faces. Therefore, given the range of unknown elements at this stage, the mission did not consider that it was yet possible to define a Desired state of conservation for the removal of the property from the List of World Heritage in Danger (DSOCR) for adoption by the Committee.

The draft legislation, which is due to be passed in the next legislative session, will create a Nan Madol Historic Preservation Trust, thereby resolving issues regarding ownership and management of the property. The appointment of the interim “Property Manager” is a significant step, but the duration of this appointment is not specified, and a permanent manager is required.

The Conservation Plan is a well-structured document that, in effect, is a practical action plan. It is influenced by the desire for more tourist access and is accordingly structured in three parts: structures and pathways that already have access; areas that have the potential for visitor access; and platforms that need urgent and sustained conservation. The Plan acknowledges the need for significant international financial support for the actual realization of the conservation objectives and the absence of a professional pool of conservation experts, with only one local archaeologist based at the property.

In 2018, vegetation clearance was undertaken under the manager’s supervision and financed through International Assistance. It achieved an initial non-invasive clearing (without root disturbance) of vegetation overgrowth at two of the principal sites: Nan Dowas and Pahn Kedira. Channel clearance was commenced to facilitate visitor access to these sites by boat, but progress is very limited so far. At two locations, Pahn Kedira and Paikapw, superficial growth was removed from retaining walls. A beneficial natural movement of silt was noted where this has been done. A boat has now been donated by the FSM Congress to facilitate continuing work on the removal of vegetation. An additional 4-5 sites will now be targeted to prepare for visitors.

Funding has been secured from the Embassy of the United States of America to conduct a LiDar survey of the property and the islands of Temwen. This will assist in defining the full extent of structures and assessing the impact of future sea-level change. Multispectral imaging will enable an analysis of the species composition of vegetation. The funding will also enable the completion of the short-term actions recommended by the 2018 mission and will facilitate larger, medium-term conservation interventions such as sea wall reinforcement, on-going maintenance planning, and replacement of raised pathways and additional culverts in causeways and silt fencing of sakau farming clearance in the highlands to prevent further siltation. Support for the continuation of this work using the US Ambassadors Fund will include the assistance of the US Navy’s Seabees for the works. However, a dedicated capacity-building programme is urgently needed to ensure local engagement.

The State Party also secured funding from Japan to achieve progress with the development of a Visitor Centre, which is small in size and lacks some important essential elements for visitor management. It also lacks a proposal for museum storage/display. This Centre is being planned in advance of the development of a Tourism Strategy, which is needed urgently to identify which parts of the property can be accessible to visitors, as this will affect the conservation programme. This Tourism Strategy was initially envisaged as part of the Management Plan, which is yet to be completed.

The progress now being made with the development of a Conservation Plan, the clearing of vegetation funded by the International Assistance and a LiDar survey supported by the US Embassy is welcomed. This should begin to allow defining a medium- and long-term phased recovery programme, which could in turn allow for the development of corrective measures and a DSOCR to be presented to the Committee.

Finally, while no further information is available concerning the hotel construction mentioned in the report, it is recommended that the Committee request the State Party, in accordance with Paragraph 172 of the Operational Guidelines, to provide detailed information on any proposed and on-going projects, in particular those related to infrastructure development to the World Heritage Centre for review by the Advisory Bodies. The information provided should include Heritage Impact Assessments (HIAs) in keeping with the ICOMOS Guidance on HIAs for Cultural World Heritage properties. 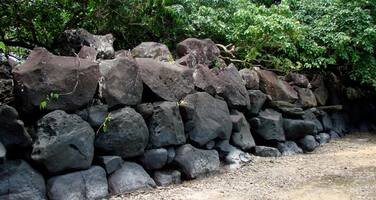