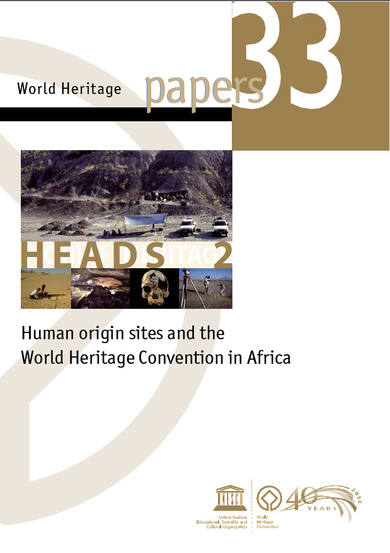 In this, the first in a series of geographically themed examinations of Human Evolution sites in the context of the HEADS (Human Evolution: Adaptations, Dispersals, and Social Developments) World Heritage Thematic Programme, current issues in human origins research and site management are explored in the context of the classic region of human evolution research: Africa.

There is no more appropriate  place to begin a regionally themed examination of human origins;  just as modern hominid ancestors dispersed from Africa millennia ago, so has much of the current, groundbreaking recent research on the topic of human origins. The vast African continent also offers a multitude of social, political and natural environments within which to examine the successes, test the limitations, and fill in the gaps of the implementation of the World Heritage Convention in the context of human evolution sites. The issue examines the evolving Outstanding Universal Value of African sites through current scientific research and discoveries. It also addresses the challenges to, and successes of, African human evolution site management and protection.  Proceeding under the mandate of the HEADS Thematic Programme, human evolution sites in Africa are approached in a comprehensive and inclusive manner, including the interdisciplinary contribution of international experts who speak to the origins of cultural diversity, its continuity today, and the imperative to protect and manage this invaluable record.

Based on the conclusions of the International Experts Meeting, held at UNESCO, in November 2008, and the meeting organized in Burgos and Atapuerca, Spain, in March 2009, and the approval of the HEADS Action Plan by the World Heritage Committee during its 33rd Session in Seville, Spain, in July 2009, a series of objectives and priorities in the consideration of human evolution sites were described. They are as follows: scientific standards necessary for providing a definition of Outstanding Universal Value (OUV); the need to develop research applied to the preservation of these extremely vulnerable sites; courses of action which will enhance international cooperation in the procedures for submitting candidatures for the World Heritage List; establishing  the most exceptional thematic narratives for improving the representation of these sites within the framework of the World Heritage Global Strategy; the use of multidisciplinary teams and tasks in order to establish an adequate justification of criteria and conditions of authenticity and integrity of paleoecological /archaeological/ environments.

After careful analysis of already inscribed sites as well as those on the Tentative List, immediate priorities were identified. It is these priorities which are addressed in this volume. Specifically, to move forward in the reflection of humankind’s oldest ancestors, particularly in the context of their adaptive ability in the face of harsh environmental and climatic changes, especially between 2.6, 1.8, and .13 million years ago, as well as examine the evidence for adaptation during the last glacial maximum (LGM) in the African context. Additionally, to examine current and future site management and protection in the context of human evolution sites from both a scientific and practical point of view by drawing on the expertise of international and interdisciplinary scholarship.

Africa’s unprecedented sequence of human occupation offers a wealth information on not only human evolution processes, but on our universal human heritage. Watershed moments in human evolution such as the evidence of bipedalism 4mya, a proliferation of archaeological remains around 2.6 mya, and the first evidence for symbolic behavior 75kya, define Africa as a singular barometer for every milestone in human evolution. Genetic, archaeological and morphological biological evidence speaks to the development of numerous human adaptations to changing environments and circumstances across space and time. The un-paralled depth and breadth of this record alone, justifies the OUV of African sites. Additionally the African record includes the exceptional remains found at sites such as Laeotoli and sites in Eastern Africa which shed light on the murky gaps in our knowledge of this period, in particular with regards to last common ancestors, and biological adaptations. By drawing on complimentary and interdisciplinary research from geological and genetic sources, the works of this volume put these various lines of evidence in articulation with each other, to create a more accurate picture of our human past, a picture that is tailored to the variable environments and time periods of the Africa record.

In particular, the following Human evolution narratives in Africa were highlighted:

But this is only half the story of human evolution in Africa, though these sites are the silent witnesses to millions of years of evolution, they exist in the modern world. Strategies for the protection and management of these sites must be considered. These sites hold universal human interest, but are often a part of local communities, and any plan of action must take into account this tension, as well as the particular social, political and environmental situations of the sites. To this end the works of this volume have made a call for interdisciplinarity in approaches to both scientific research and site management, consideration of local communities and private lands throughout the entirety of the nomination process, and the presentation of research from the sites in both academic and public arenas in way which ensures the continued integrity of the site for future generations.

Approaches to the archaeological record