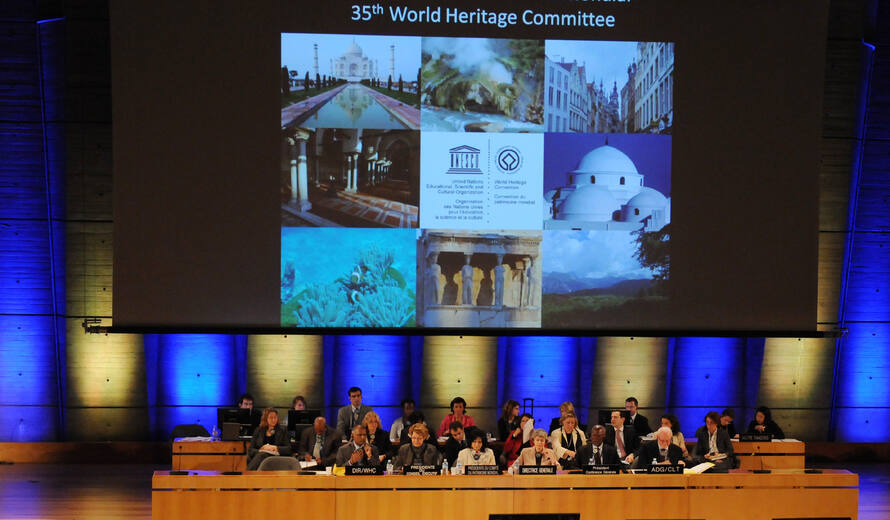 The Chairperson of 35th session, Shaikha Mai bint Muhammad Al Khalifa, Minister of Culture of the Kingdom of Bahrain, argued that "the future of the Convention is essential [...] to maintain efforts carried out over almost 40 years for the protection of irreplaceable and priceless heritage of humanity."

The Chairperson highlighted the challenges to the credibility of the Convention: "its relations with other international conventions, the balance within the World Heritage List [...] between the types and categories of properties inscribed, the reinforcement of capacities [...], the essential role of local communities, awareness raising and the promotion of the principles of the Convention."

"In a world of change, World Heritage is a reminder of all that unites humanity," said the Director-General of UNESCO, Irina Bokova. "It is a reminder also of the ties between culture, nature and societies."

Both Davidson L. Hepburn, President of UNESCO's General Conference, and Eleonora Valentinova Mitrofanova, Chairperson of the Organization's Executive Board, highlighted the importance of World Heritage protection for UNESCO and for the international community.

During the coming days, the World Heritage Committee will examine the state of conservation of 169 World Heritage properties, including 34 on the List of World Heritage in Danger. It will also examine 37 sites proposed for inscription. They are:

Journalists who wish to cover the meeting require accreditation