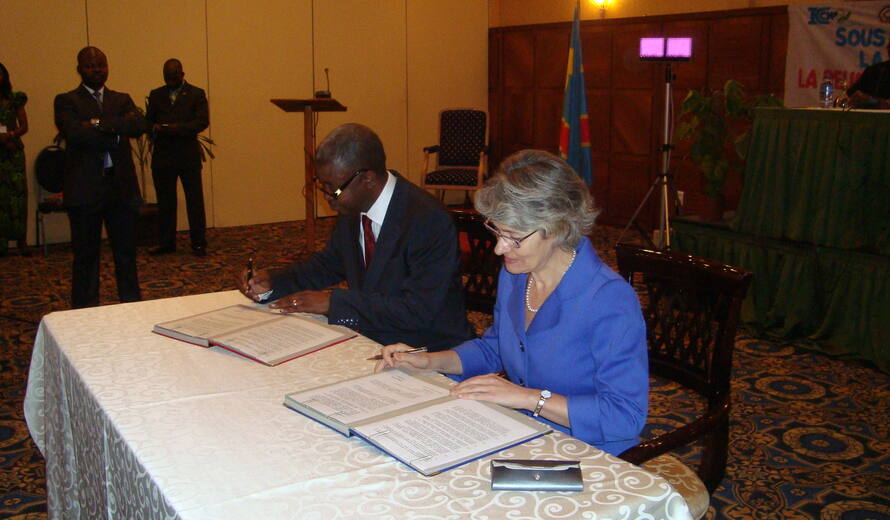 At the invitation of the Congolese Government, the high-level meeting requested by the World Heritage Committee in 2007 (Christchurch 2007) was held with UNESCO Director-General Irina Bokova and Congolese Prime Minister Mr Adophe Muzito in attendance.

The Democratic Republic of the Congo is home to exceptional biodiversity and five World Heritage sites: the Garamba, Kahuzi-Biega, Salonga and Virunga National Parks, as well as the Okapi Wildlife Reserve. These sites have all been on the List of World Heritage in Danger for more than a decade.

The main points on the meeting agenda were the examination of the state of conservation of the five sites and putting into place corrective measures recommended by the World Heritage Committee. During the session, the Congolese Wildlife Authority (ICCN) presented its Strategic Action Plan for progressively removing the sites from the Danger List.

The participants were unanimous in expressing their deep concern to the Congolese Government regarding the granting of a concession for oil exploration in an area of Virunga National Park. The biodiversity found there is there is the most important of the Albertine Rift.

At the conclusion of the meeting, the Director-General and the Prime Minister signed the Kinshasa Declaration, in which the Congolese Government commits to implement the Strategic Action Plan proposed by the Congolese Wildlife Authority. It involves, notably, enforcing the law (in particular laws concerning nature conservation and the mining code), making sites secure, reinforcing the operational capacity of the Congolese Wildlife Authority, reducing commercial poaching, stopping the illicit exploitation of natural resources and strengthening the efforts of peaceful evacuation of illegal occupants of protected areas.