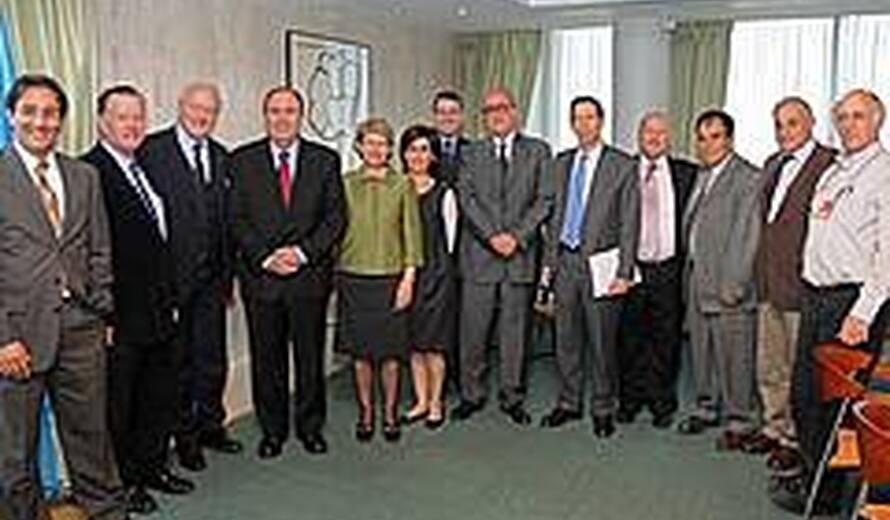 On 14 October 2010, UNESCO Director-General Irina Bokova convened Israeli, Jordanian and Palestinian experts for a 'brainstorming meeting' to reactivate the UNESCO Action Plan for the safeguarding of the cultural heritage of the Old City of Jerusalem and its Wall, building on the constructive decision taken at the 34th session of the World Heritage Committee in Brasilia last August.

In her opening remarks, the Director-General underlined UNESCO's involvement in the Old City's preservation, noting that the Old City of Jerusalem and its Walls were inscribed on UNESCO's World Heritage List since 1981 and on the List of the World Heritage in Danger since 1982.

"Over decades, UNESCO has undertaken missions to Jerusalem and carried out a number of projects. But much remains to be achieved for the conservation of the Old City of Jerusalem. In 2001, UNESCO launched an international initiative for the safeguarding of the Old City during the 31st session of [the Organization's] General Conference, which was adopted at the 32nd session in 2003, aiming at a comprehensive Action Plan for the conservation and safeguarding of the cultural heritage of the Old City of Jerusalem. Guidelines for such a Plan were designed by an international committee of experts composed of 12 international experts which met in 2005 and 2006, advising UNESCO's Secretariat in its task," underscored Irina Bokova.

The Director-General went on to highlight that the elaboration of the Action Plan was undertaken in a spirit of cooperation with all the concerned parties and had been welcomed by UNESCO's Executive Board and the World Heritage Committee in 2007.  "Taking into account the specific conditions prevailing in the Old City of Jerusalem, it was agreed to follow a pragmatic approach and, therefore, the outlined Action Plan identified short, medium and long-term objectives, including training, educational and cultural activities, and the preservation of sites and monuments of the Old City of Jerusalem and its Walls," she said.

Irina Bokova recalled the request made by the World Heritage Committee at its 34th session in Brazil to send a joint World Heritage Centre/ICCROM/ICOMOS Reactive Monitoring Mission to assess and advise on progress made in the implementation of the Action Plan, and emphasized that cultural heritage protection and conservation lie at the very core of UNESCO's mandate and long-standing expertise.

In conclusion, the Director-General expressed her hopes of success in the meeting's deliberations and called on the participants to assure the international community that the parties concerned with he safeguarding of the Old City of Jerusalem are willing to cooperate.

At the meeting, the group of experts recommended enhancing confidence and cooperation among concerned parties and experts in order for them to work better in a sensitive and complex environment. Another recommendation was to identify appropriate mechanisms for UNESCO to improve technical assistance for the implementation of the Action Plan and the safeguarding of the values of the site, including the provision of advice, the granting of permits, the facilitation of works, and the free access to the sites.

The group of experts also suggested strengthening sensitisation and awareness programmes, including academic cooperation and cultural activities, notably towards youth and women. They finally recommended the fielding of a joint World Heritage Centre/ ICCROM/ ICOMOS Reactive Monitoring mission to identify, in cooperation and consultation with the concerned parties, appropriate operational and financial mechanisms and modalities to strengthen technical cooperation.