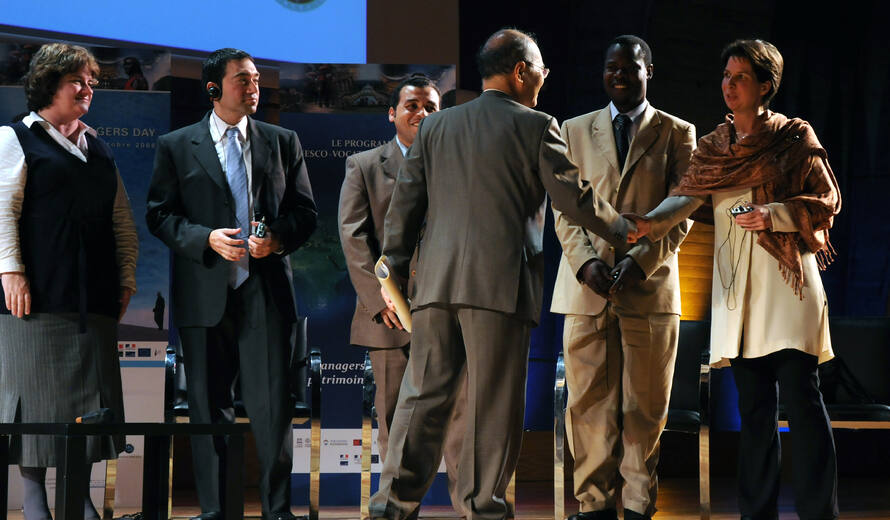 Five young heritage professionals from Canada, Egypt, Hungary, Peru, and Zimbabwe, received UNESCO-Vocations Patrimoine fellowships to pursue post graduate research at University College Dublin (Ireland) and at the Brandenburg Technical University of Cottbus (Germany) in a ceremony at UNESCO Headquarters on the evening of 22 October.

The five fellows who will benefit from the programme are:

Jane Brewer of Canada received a 2-year grant to study at Brandenburg Technical University and increase her knowledge of the World Heritage Convention to help Parks Canada identify strategies to increase public awareness of, and engagement in, World Heritage sites. Ms Brewer will focus on the various communities within Gros Morne National Park World Heritage site - including local residents, the tourism industry and youth.

Zsuzsa Tolnay, from Hungary, will benefit from a 2-year fellowship with University College Dublin. In her research project, she will work on the interpretation problems of the Aggtelek Karst Caves and the elaboration of an interpretation strategy which should also benefit local communities. Ms Tolnay holds a Master of Science degree from Kossuth Lajos University and has worked in tourism management, strategic planning and project management at Aggtelek National Park.

Antonio Gamonal, Peru, will spend two year with Brandenburg Technical University developing guidelines for a participative monitoring system as part of a strategic plan for the conservation of the Chan Chan Archaeological Zone World Heritage site. The plan is to ensure the active participation of the local community. A graduate in Archaeology from the Pontificia Universisdad Catolica del Peru, Mr Gamonal works in design and supervision of national cultural policies at the National Institute of Culture in Lima.

El Sayed Yones, from Egypt, will also spend two years at Brandenburg Technical University where he will study management issues concerning Abu Mena World Heritage site, surveying and assessing existing conditions, analysing threats and making technical plans for the safeguarding of the site. Mr Yones, a graduate of Cairo University, has been working as an archaeologist in the Egyptian Supreme Council of Antiquities since 2002, and is now an inspector of archaeology.

Simon Makuvasa, Zimbabwe, will spend two years at University College Dublin where he will explore solutions to ownership issues concerning the transboundary Victoria Falls World Heritage site with a view to creating a management involving both Zambian and Zimbabwean authorities. Mr Makuvasa, who holds an archaeology degree from the University of Zimbabwe, works with the National Museums and Monuments of Zimbabwe as curator of archaeology in the west of the country.

The aim of the fellowships is to help site managers handle threats to which the 878 World Heritage sites currently inscribed around the world are exposed, including environmental degradation, climate change, development and mass tourism. As part of their training, the recipients of the fellowships will work both in the academic institutions to which they are attached and in the field.

The fellowships are destined to professionals specialising in either natural or cultural heritage. They are the result of a partnership between UNESCO's World Heritage Centre and Vocations Patrimoine, which is supported by the multinational groups AXA and MAZARS, The Headley Trust, and the French Ministry of Culture and Communication.