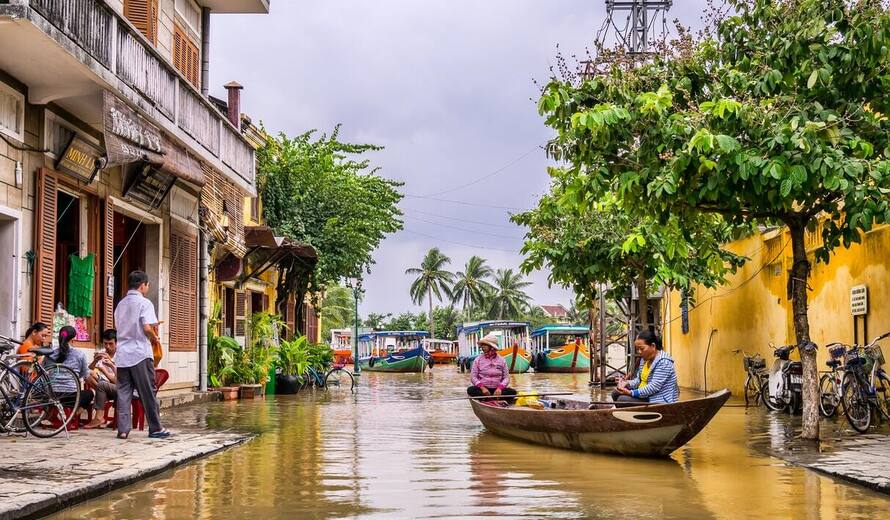 Strengthening synergies between culture and science in the fight against climate change was at the centre of the first ever meeting organised jointly by UNESCO, the Intergovernmental Panel on Climate Change (IPCC) and the International Council on Monuments and Sites (ICOMOS) from 6 to 10 December 2021. This online 'International Co-sponsored Meeting on Culture, Heritage and Climate Change' brought together scientists and experts to advance heritage and culture-based actions for climate change adaptation and mitigation.

Climate change represents one of the greatest threats to culture and heritage today, from increasing fires, floods, and droughts, to the loss of living heritage practices and traditions. At the same time, culture has the potential to provide creative solutions to these mounting challenges. Traditional land- and water-management practices can provide a roadmap for the future, while cultural practices and heritage places serve as psychological and physical refuges for communities during and after emergencies. Yet, despite their crucial contribution to climate change mitigation and adaptation, culture and heritage have received limited attention in the global agenda for climate action, as well as in responses to climate change.

In his opening remarks, Mr. Ernesto Ottone R., Assistant Director-General for Culture of UNESCO, stressed that “UNESCO has long been working to safeguard the world’s heritage from the effects of climate change, advancing the role of culture for climate change mitigation and adaptation, and its key role as a source of resilience.”

The meeting brought together a gender-balanced group of over 120 scientists and experts from all regions of the world, mobilizing research, expertise, and insights from a wide range of disciplines, such as archaeology, anthropology, architecture, climate science, ecology, environmental humanities, indigenous land management, post-disaster response, protected areas management, sociology, traditional knowledge, urban planning, etc. This meeting aimed at establishing a scientific basis to integrate cultural dimensions in climate action through three key areas: (1) vulnerability and understanding risks, (2) intangible cultural heritage, diverse knowledge systems and climate change, and (3) the role of cultural and natural heritage for climate action. In addition to the official launch event, the meeting included public thematic panel discussions on each of the three above-mentioned key areas, as well as over 75 break-out sessions for participants to explore specific lines of questioning. Project partners included the International Union for Conservation of Nature (IUCN) and Local Governments for Sustainability (ICLEI), and the Conference was supported by the German Environmental Foundation, as well as the Swiss Federal Office of Culture and the National Cultural Heritage Administration of China.

As the IPCC Chair, Mr. Hoesung Lee, highlighted, “Not only is this a historical meeting but it is a historical opportunity to explore and deepen our collective knowledge and understanding of how climate change impacts culture and heritage, and how these can enlighten our pathways to possible solutions in tackling climate change.”

Discussions addressed the nature and scope of representation of diverse forms of knowledge and culture and heritage in climate literature and assessments, as well as the integration of diverse knowledge systems across areas of climate research and response, keeping in mind that climate change itself has a history. Participants were also invited to look at the climate change-related impacts on culture and heritage, including methods to describe the vulnerability of culture and heritage, but also adaptative preservation methods. The last day of the meeting was dedicated to climate solutions including the capacity of numerous heritage places to hold carbon as well as the understanding that cultural and natural heritage are sources of resilience, and a source of inspiration for art, connection, and understanding climate action.

Indeed, forests and oceans serve as key resources for climate change mitigation, capturing the carbon that humanity increasingly produces. Forests in World Heritage sites cover 69 million hectares, roughly twice the size of the Republic of Congo. They protect and store 13 billion tons of carbon, which if released into the atmosphere as CO2, would represent almost 1.3 times the global total annual CO2 emissions from fossil fuels. UNESCO's World Heritage marine sites comprise at least one fifth of blue carbon ecosystems and store carbon assets equivalent to about 10% of global greenhouse gas emissions. Yet these carbon sinks have limits and are fast approaching saturation.

ICOMOS President, Ms. Teresa Patricio, reminded all participants that “It is essential that we find ways to ensure that culture and heritage are included in the fight against climate change and that they are central to all international agendas.”

For more information on the meeting, please visit: https://www.cultureclimatemeeting.org/