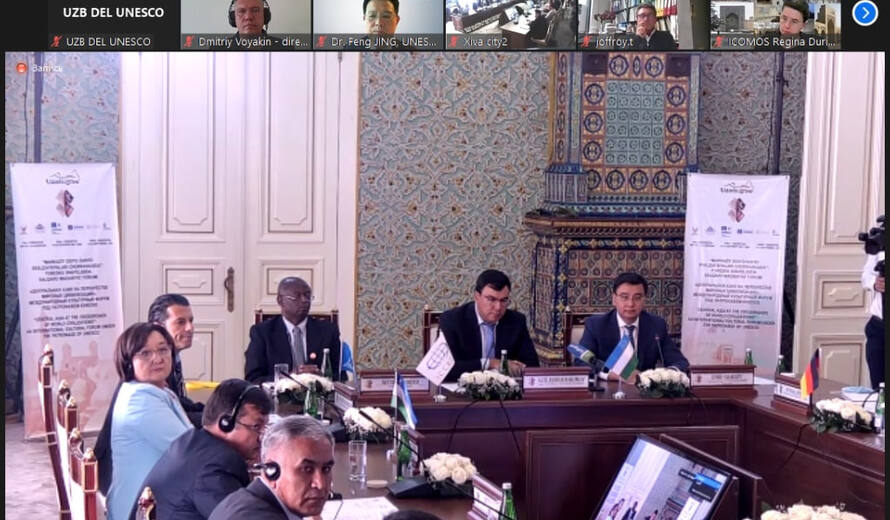 The International Advisory Committee (IAC) on World Heritage Sites in Uzbekistan was officially opened in Khiva and online on 15 September 2021, within the framework of the International Cultural Forum “Central Asia at the Crossroads of World Civilizations”.


The initiative to establish this committee together with UNESCO was put forward by the President of the Republic of Uzbekistan H.E. Mr. Shavkat Mirziyoyev when he met with UNESCO Director General Ms. Audrey Azoulay in Uzbekistan in August 2019.

Uzbekistan was represented at the ceremony by Deputy Prime Minister, Minister of Tourism and Sports Mr. Aziz Abdukhakimov, and UNESCO by the Deputy Director of the World Heritage Centre of UNESCO (WHC) Dr. Jyoti Hosagrahar. Other participants included the Director General of ICCROM Dr. Webber Ndoro and members of the IAC, well-known international experts from Belgium, France, Georgia, Germany, Israel, Japan, Kazakhstan, Palestine, Romania and Uzbekistan, as well as representatives of ICCROM and ICOMOS, Advisory Bodies to the UNESCO World Heritage Committee. Vice-Governors of Uzbekistan’s four World Heritage cities and the management authorities also attended the meeting to present the situation of the sites and perspectives of cooperation.

During the meeting, participants discussed the goals and objectives of the International Advisory Committee, aimed at advising on the safeguarding of four World Heritage properties in the country – 'Samarkand – Crossroads of Cultures', 'Historical Center of Bukhara', 'Historical Centre of Shakhrisabz' and 'Ichan-Kala'. Experts also considered various aspects of establishing effective IAC activities and further plans to work jointly with WHC, ICCROM, ICOMOS and members of the committee to support implementing the World Heritage Convention in Uzbekistan.

The Delegation of Uzbekistan informed participants of recent measures undertaken under the leadership of the President of the Republic of Uzbekistan Shavkat Mirziyoyev to protect, enhance and popularize the rich and unique historical and cultural heritage of the country, particularly the World Heritage sites. Several important aspects were raised, such as improving legal protection in this area, the use of innovative methods in decision-making in accordance with international standards, and the mobilization of significant administrative, financial, and technological resources to support these activities.

Representatives of the khokimiyats (administrative bodies) of Samarkand, Bukhara, Khorezm, Kashkadarya regions, where the World Heritage properties are located, paid attention to various events aimed at preserving outstanding universal value (OUV) and restoring of architectural sites and objects. They made detailed presentations on the measures taken by each regional administration to implement the Decisions of the World Heritage Committee and recommendations of monitoring and other missions of UNESCO and Advisory Bodies to Uzbekistan.

International participants highly regarded this initiative of the government of Uzbekistan as “timely” and “relevant”, full implementation of which could support World Heritage preservation. In their opinion, the launch of the IAC in Uzbekistan, like in some other countries, is a unique and innovative approach to countering modern challenges and solving problems that the World Heritage properties in Uzbekistan are facing at this stage. It was emphasized that such a positive experience of Uzbekistan to interact with UNESCO can serve as an example to follow for many other countries.

Members of the IAC, with diverse and multidisciplinary backgrounds in the areas such as conservation, restoration, archeology, architecture, urban planning, legal issues, and community outreach, expressed their full commitment and readiness to contribute to this platform. Within the framework of the IAC, along with other issues, increased attention will be paid to the spirit of multilateral cooperation through sharing expertise and technical skills. This will raise the potential of national experts and specialized agencies in coping with the complex challenges in the harmonious preservation of heritage and reaching developmental objectives.

The next meeting, to be held preferably in person, is expected to take place by the end of 2021 in Uzbekistan.