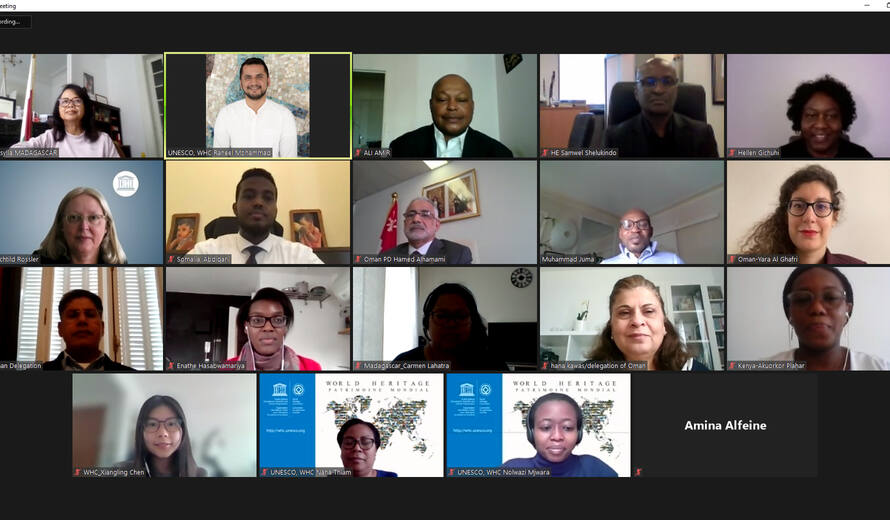 In her welcoming remarks, Ms Mechtild Rössler, Director of the UNESCO World Heritage Centre stressed the importance of this project that is anchored in UNESCO’s Global Strategy to encourage countries to become States Parties to the Convention and to support them in preparing Tentative Lists and credible nomination dossiers that will be represented on the World Heritage List. This project will also contribute to the objectives and main actions of UNESCO Priority Africa, the 2030 Sustainable Development Agenda, and Aspiration 5 of the African Union’s Agenda 2063.

The Ambassador of Oman, H.E. Dr Hamed Al-Hamami reiterated the commitment of the Sultanate of Oman to provide support to the Eastern Africa region in the implementation of the 1972 World Heritage Convention, he emphasized that the launch of this project is a good start for  stronger collaboration between the Sultanate of Oman and the Eastern Africa region.

The Ambassador of Comoros, H. E. Mr Ali Amir, recognized the target to train heritage professionals and include local communities in each beneficiary country, which would help to reduce the inequalities between the islands of Comoros.

As the current President of the Eastern Africa group at UNESCO, H.E. Mrs Yvette Sylla, Ambassador of Madagascar highlighted the unprecedent full-fledged support of this project.

Mr. Abdiqani Ahmed Abdullahi from the Somali Permanent Delegation to UNESCO informed the recent ratification of the 1972 World Heritage Convention by Somalia and how this project supports the country’s strategy for implementing cultural conventions.

E. Mr Samwel William Shelukindo, Ambassador of Tanzania expressed the urgent need of rehabilitation of the House of Wonders in Stone Town Zanzibar and thanked the timely support of Sultanate of Oman in this regard.


All speakers expressed their condolences to the Ambassador of the United Republic of Tanzania on the passing of President JP Magufuli.