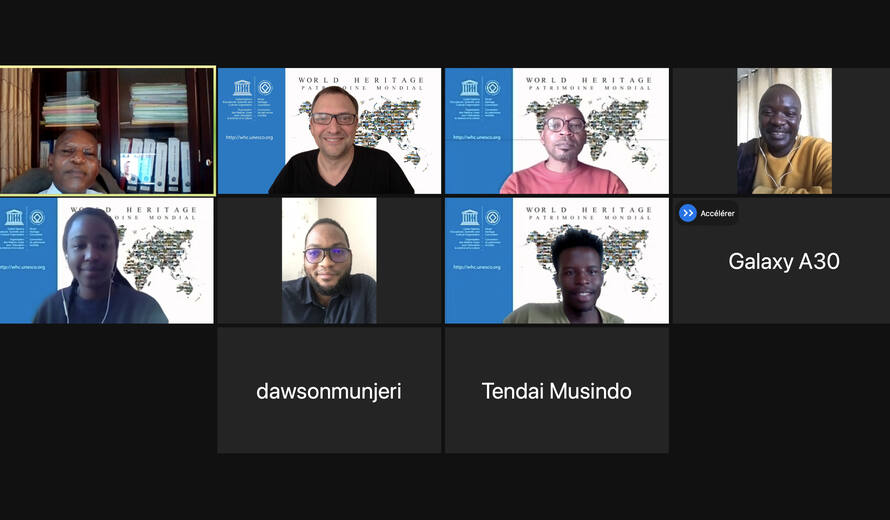 Integrating World Heritage in the Curricula of Institutions of Higher Learning in Africa – UNESCO's World Heritage Centre (WHC) and Chair on African Heritage at the Great Zimbabwe University join forces to promote capacity building in Africa.

On 24 February 2021, the Africa Unit of the UNESCO WHC and the Great Zimbabwe University (GZU), held an online consultation meeting dedicated to exploring areas of cooperation and the increased role of Universities in conserving and promoting African World Heritage sites.

The UNESCO Chair on African Heritage at the Great Zimbabwe University was recently established, following a signature of the agreement by Professor Rungano Zvobgo, the Vice Chancellor of Great Zimbabwe University, and Audrey Azoulay, the Director-General of UNESCO. This was also as a result of a workshop held at the Great Zimbabwe University in April 2018, followed by a second workshop in Saint-Louis (Senegal) in November 2018. These workshops aimed to assist selected institutions of higher learning in Africa to integrate World Heritage conservation in their curricula by supporting or establishing departments and programmes specialised in the safeguarding of African heritage.

Professor Munyaradzi Manyanga of the GZU recognized that the clear mandate of the new UNESCO Chair is not only to train in heritage, but to allow training to help uplifting and empowering communities: "Today's University curriculum must go beyond teaching and research, but build more partnerships and networks to address cross-cutting issues related to innovation, industrialization, conservation, among others, with the objective to generate knowledge for the betterment of the world and address global challenges," he stated.

Muhammad Juma, Chief (ai) of the Africa Unit of the WHC underscored the central role that Universities have to play in conservation and capacity building, stressing that, "this is crucial not only to provide continued quality training for today's heritage professionals and site managers, but also to promote heritage professions and vocational paths for the youth and to create the future generation of professionals".

The WHC and the GZU are committed to cooperate in various areas to implement the World Heritage Convention in Africa inspired by the new draft Action Plan proposed following the Third Periodic Reporting exercise in Africa, such as the mapping of existing heritage curricula in institutions of higher learning in Africa and the creation of dedicated networks.