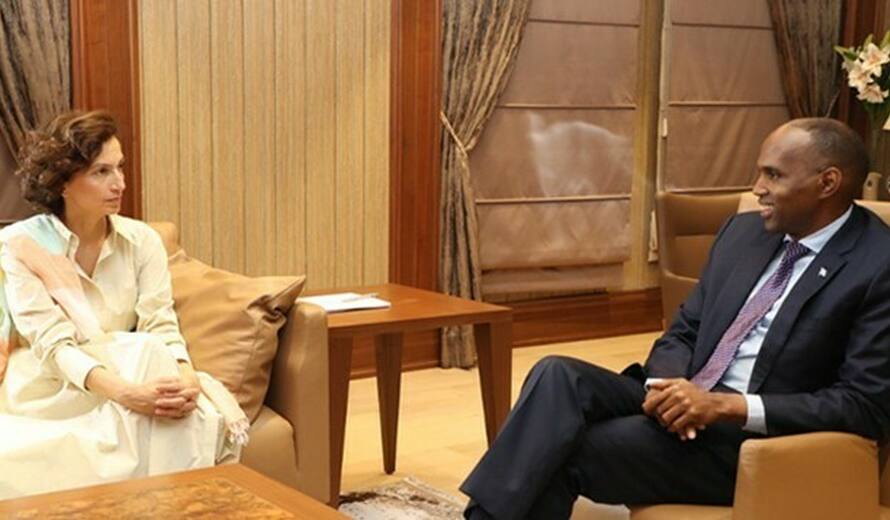 Director-General Audrey Azoulay today carried out a historic visit to Somalia, the first by a Director-General of UNESCO to reestablish the long tradition of cooperation between UNESCO and the country after years of conflict. The Director-General held talks with Prime Minister Hassan Ali Khaire, Minister of Education, Culture and Higher Education, Abdullahi Godah Barre, and Minister of Women and Human Rights Deqa Yasin.

“The human dimension is key to the country's peace-building and reconstruction effort,” declared the Director-General. “Culture and education, are just as important as rebuilding physical infrastructure when it comes to ensuring sustainable peace and development for the people of Somalia in the years to come,” she added.

The Director-General’s visit recognized Somalia’s renewed commitment to multilateralism. This was further evidenced today by the country’s promulgation of UNESCO’s cultural conventions, which took place during the visit of the Director-General.  The conventions ratified include the 1954 Hague Convention for the Protection of Cultural Property in the Event of Armed Conflict, the 1972 World Heritage Convention, and the 2003 Convention for the Safeguarding of the Intangible Cultural Heritage. In Mogadishu, the Director-General also signed a Memorandum of Understanding with the government of Somalia, paving the way to strengthen multilateral cooperation through education and culture and support the country’s peacebuilding and reconstruction efforts.

This includes enrolling schoolchildren, with a specific focus on young girls, ensuring free and quality primary and secondary education, as well as making available open digital resources, including textbooks. In culture, the collaboration foresees professional capacity building and training, especially for museum administrators and archivists. UNESCO will also accompany the country in the rehabilitation of three important cultural sites: the National Theatre, Museum and Library, which will further contribute to the peace-building process.

“UNESCO is determined to mobilize the international community in a multilateral drive to support the government’s rehabilitation work through education and culture,” the Director-General declared. UNESCO’s assistance to Somalia will be implemented as part of the United Nations’ wider efforts and within the Somalian National development Plan to contribute to the reconstruction and consolidation of peace in the country.